Here is, for sure, one of the most bizarre and original records ever released in the hip-hop genre. Just think about it: this looks exactly like a very long two-hour posse cut, where a very big bunch of rappers, all weirder than the others, are declaiming a never-ending collection of ego-trips, schoolboy pranks, and delirious speeches about things like the dinosaurs, the Egyptian pyramids and the Martians. 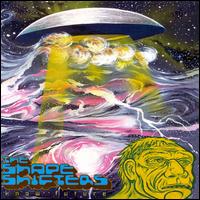 On top of that, just imagine an assortment of implacable beats, mixed altogether at a mid-tempo pace, and consisting exclusively of atmospheric loops with absolutely no groove. Then, add to this formula some strange and psychedelic noises looking like the soundtrack of some science-fiction z-movie. And you get two records full of very similar music, the only exception being the incongruous heavy metal-sounding "Gen. X Dot All". Hey, I am not selling this well, am I?

Well, actually, I should, since this compilation of tracks recorded from 93 through 99 is just great. It does work, thanks to the guys featuring there, all charismatic – in their own ways, all unique, and all aimed at flooding the Californian indie rap scene with a multitude of remarkable joint or solo projects, all over the 2000's.

Those rappers, belonging to the Shape Shifters collective - the Y2K generation of the Project Blowed tradition – were Life Rexall, Radioinactive, Existereo, Matré, 2Mex, Awol One, and some others we may forget about – they were so many. And of course, Circus, the most brilliant of all wack MCs, was part of them. Beyond his own verses, he was the true inspirer of this double album, which had his production style, his conspiracy theories, and his weird sense of humor – sentences like "lesbian serial killers could help reduce the population", these kinds of stupid things... Also, as if this was not enough, the Shape Shifters had invited some like-minded rappers, more particularly people related to Anticon like The Pedestrian, Sole, Sixtoo and Buck 65 so that they can share their own rants.

Do you remember the time of your first teenage excitements? When you were discovering music your mother, or your dumb classmates, did not dig at all, while you just loved it? Do you remember how exhilarating this was?

Well, with Know Future, it is the same story again. Except that it is no longer your parents, or the guys in the schoolyard, who are doubtful. It is your neighbors now, your kids, or the boom bap purists. It is these rock snobs with a subscription at The Wire magazine. All these easily influenced people, crushed by the weight of conventions – though they think they are just the opposite – and who cannot understand, because they are not seeing things from the planet Mars, like the Shape Shifters said they were doing on Know Future, an album it is almost impossible to listen in one go, but which cannot be experienced in a different way.