Angel Del Villar II, a.k.a. Homeboy Sandman, is originally from New-York, and more precisely the Queens. He studied law, but he preferred to start a career in rap music, where he was noticed for his verbal dexterity, while performing at the legendary Nuyorican Poets Café. His self-released Actual Factual Pterodactyl (2008) and The Good Sun (2010) have been praised by the critics, which earned him a contract with Stones Throw, the West Coast indie rap institution. There, he released two EPs, and then a much more publicized record, First of a Living Breed. 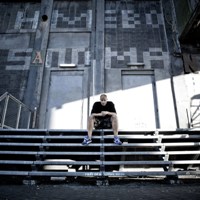 With such a pedigree, it was expected that Homeboy Sandman would be into some intellectual and respectable kind of hip-hop, and that he would have nothing to do with the bombastic trap rap which was all the rage, elsewhere in the US. It was confirmed with this album, which smelled heavily like nostalgia, with its heavy reliance on samples and wordplays, and its taste for old routines, like the diss track "Eclipsed". On this record, the rapper was laidback, reflexive, and he rapped on a conversation mode, delivering advices to kids ("For the Kids"), and urging people to raise their awareness ("Illuminati"). Or, a humble and fragile MC, he claimed that the music world did not really change him as a person ("Not Really").

Paved with good intentions, this kind of adult rap can sometimes be boring. And indeed, expectedly, Homeboy Sandman can be a bit tedious at times. The album, however, was overall good, and its beats played a large part into this. Some could blame First of a Living Breed for its unreasonably eclectic production, and for its lack of coherence, due to the too many beatmakers contributing to it, people like Oh No, Oddisee, Jonwayne, 6th Sense, Invisible Think, and some others. However, it was just the opposite. The beats were First of a Living Breed's main attraction.

The album started with the striking instrumental of "Rain", which looked like the soundtrack of a video game, like with "Let’s Get ‘Em’s". A bit later, "Illuminati" was built marvelously around an ambient beat, just like the eponymous track. A quiet flute completed the depiction of New-York on "4 Corners". And there were nice oddities like the child sample of "For the Kids", which was both astute and irritating, or the strange knives and forks concerto on "Cedar and Sedgwick". More convincing, "The Ancient" was mixing some oriental sound with wild onomatopeias.

Homeboy Sandman would always accommodate these many variations. He adapted easily his tone, voice and flow to them. For example, his light singsong fit perfectly well with Oddisee's brass and piano on "Watchu Want From Me?". And he excelled as well at a robotic delivery on "Sputnik" and "Mine All Mine". Thanks to his plasticity and his versatility, and to his lyrical skills, the rapper from New York proved that the good reputation he had earned over time was fully well deserved.