In 2014, while Future and his clique were sojourning in the Emirates, on their way to a prestige weekend taking place by the time of Abu Dhabi's grand prix, DJ Esco was arrested in the Dubai airport with a few grams of marijuana. UAE authorities don't joke with drugs, and he was sent for 56 nights in a local prison. In early 2015, a few weeks after his liberation, he named his new mixtape according to this unpleasant experience, and expectedly, this was talking about personal torments. Future, however, didn't say a word about his DJ's misadventure on this release: on the opposite, he focused on his own emotional troubles, and closed the great mixtapes trilogy inspired by his break-up with Ciara, he had started after Honest. 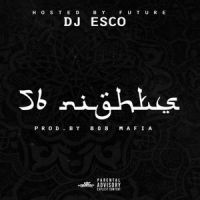 We've heard it all before, on Monster and Beast Mode. On this short project, Future pursued his psychotherapy, and he fought his heartache with debauchery. On 56 Nights, the Atlanta rapper talked about escaping his sad feelings through an emotionless and disincarnated kind of sexuality, or through drugs, in the sing-song style he had heralded, a few years before. This third edition of his trilogy, though, was very different from the previous one. There was no Zaytoven on this mixtape, but other kinds of beats, produced by the 808 Mafia – and mostly Southside. The tone was less triumphal, the music was more ethereal, or even scraggy, on tracks like "Purple Comin In" and "Now". It was more blurry, less catchy. And this feeling was strengthened by Future own raps; quite often, they were muttered and low.

This blackness had various nuances. We had deathly choruses on "Diamonds from Africa", a track where, for once, Future had the beginning of a social conscience. We had a strident and minimalist synthesizer on "No Compadre", sirens and a bass on "Trap Niggas" – a song so good he would reuse it on his next album, DS2 – and the sad piano of a sumptuous closing track, the eponymous "56 Nights". One track, though, the only one not produced by Southside – Tarentino was the man in charge, there – shone differently from the others. With lyrics running from rap's routine misogyny to a charge against police violence, "March Madness" was a pivotal song and the best, on this third manifestation of Future's resurrection.