Let's be honest. Even if it is the very basis of the Twin Cities rap scene, and a founding record for independent hip-hop - arguably on par with Funcrusher Plus - the first album from Atmosphere was far from perfect. Its CD version had fillers. Some of its tracks were a bit torpid and laborious. Apart from a few bolder ones, Ant's beats were most of the time absolutely trite. As for Spawn's raps and raspy voice, their main interest was to offer a fitting contrast to those of the other MC. 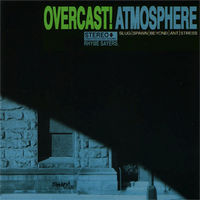 This other MC, actually, was the main thing that mattered on this album. This record was, entirely, a Slug thing. It was his work, his child, his breed. All the rest was ornaments only. Intensity, eloquence, smart lyrics, complex personality: as soon as with Overcast!, Sean Daley was the charismatic and fundamental rapper he would remain, despite a frustrating discography. He was one of these few artists confirming as soon as the first listening experience, that they were capital.

Originally, though, Atmosphere's agenda was rather conservative. Located in the Midwest, quite far from the main hip-hop scenes and trends, the band seemed to have one aim: preserving hip-hop, ensuring it stays fresh, and maintaining its link to MC battles. It was the perfect contrary to the triumphing bling-bling rap of the late 90's. However, because it was opposite to the materialistic stance of the mainstream rappers, Atmosphere would innovate. It would, first and foremost, introduce hip-hop to introspection and self-criticism, in an innovative way.

It was obvious as soon as "Scapegoat", the band's manifesto. There, on a striking piano loop, Slug would go through a never-ending list of pretexts, people use to escape their responsibilities: "it's the East Coast, no it's the West Coast, it's public schools, it's asbestos, it's mentholated, it's techno, it's sleep, life, and death, it's speed, coke, and meth, it's hay fever, pain relievers, oral sex, and smokers breath, it stretches for as far as the eye can see, it's reality, fuck it, it's everything but me". Assuredly, the rapper meant that he would never go this apologetic way.

Slug, also, would start his self-examination as soon as with the violins of the epic "1597": "hence forth, step within my psychoanalysis, calluses upon my mind make me strain for my lines". He would pursue it with "Brief Description", claiming he would like to learn before his death who he really was. And he would persevere with the existentialist “Clay”. The quest would go on with "Caved In", a tribute by Spawn to his father, and a song Slug could easily have authored himself, considering his admiration for his own genitor, an African-American musician.

Overcast!, though, was not entirely made of this. Elsewhere, the MC would be the emo-rapper many people still think he exclusively is – the archetype and godfather of all White and fragile indie hip-hop MCs to come. Daley, who would also like the irreverent side of rap music, would soon have to fight against his own caricature. In the future, he would need to deny his repute as an introvert and sensitive man.

As soon as in 1997, his lyrics and beats were more diverse than that, like with "Complication", a track about a woman unable to find a stable partner, or with the innovative bird song samples of "Cuando Limpia El Humo". The first album from Atmosphere also had the great "Sound is Vibration", a song at least as good as "Scapegoat", and expectedly, the most musical one on Overcast!, thanks to its harp and the two rappers playing with each other. Last but not least, the album would end with "Primer", a track as virulent as "Scapegoat", though very different.

Obviously, this extraordinarily violent and powerful enactment of a marital fight – somehow the premises of Eminem's "Kim", in a less nihilistic way – was not to be taken at face value. It was, primarily, a tale about poverty, a depiction of the underclass. It was the portrayal of a downgraded man, frustrated with his inability to deliver to his spouse the comfort and protection she may expect from him, and who retaliated through misogyny and domestic violence: "first of all bitch, I never promised I'd be rich, so fuck you and your wishes, ya need to do the dishes".

This track was apparently contradictory to the style he is frequently associated with, but Slug had not become suddenly dumb and brutal. No. He just demonstrated, with "Primer", that he could do something else than sharing his personal torments, that he could excel in realist rap as well. He showed with style that he was the smart, complex and dual artist, so many would fail to emulate.