By the end of the 90's, when time was come for underground hip-hop to be celebrated, Jurassic 5 was among those to get some praise from the music critics. It happened when they released their untitled EP in 1997, and at a larger scale the year after, when they changed it into a full album. Now signed on a major label, Interscope, performing at rock festivals as large as Lollapalooza, opening concerts for Fiona Apple, and particularly celebrated in England, they represented, for an audience not too deep into hip-hop, the Californian side of its underground. 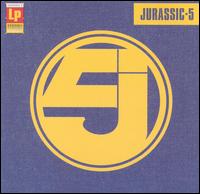 Jurassic 5 – which, in fact, had 6 members – had a great pedigree. When they were still spread into two separate bands, the Rebels of Rhythm and Unity Committee – they would unite in 1995 on a single, acurately named "Unified Rebelution" – the rappers Marc 7even, Chali 2na, Zaakir, Akil, and the producers and DJs Cut Chemist and Nu-Mark, had started their careers at the Good Life Café. They were regulars of this prestigious open mic in L.A., learning how to have flexible flows along with virtuoso MCs, like those from the Freestyle Fellowship.

However, contrary to Aceyalone and his folks, the members of Jurassic 5 were not visionaries. They were, actually, the complete opposite: this band was entirely focused on the past. Its name said it: it claimed to be prehistoric, and it had a number in it, such as old school bands like the Treacherous 3, the Fearless 4 or the Furious 5. These people's aim was clear: they wanted to resurrect old hip-hop. And to do this, they would rap altogether in choruses, on "In the Flesh", "Jayou" and "Action Satisfaction"; they would be nostalgic on "Concrete Schoolyard"; they would overvalue free-styling on "Improvise"; they would restore the central role of the DJ, giving plenty of room to scratches and samples ("Lesson 6: The Lecture"); everywhere, they would opt for playful lyrics and bouncing rhythms. In the 90's era, at a time when rap had turned aggressive and sinister, they would preserve the heritage of the Native Tongues, or they would go even further back in time.

As a matter of fact, they would go much too far. The Jurassic 5 LP, indeed, could sometimes be as boring and inconsequential as it was light and joyful. Three tracks only, actually, were really outstanding: the pleasant "Jayou", thanks to its catchy flute beat; "Concrete Schoolyard", their anthem, where they exposed their full philosophy; and the turntablist "Lesson 6", for its great sampladelia. These were all great, but not enough to legitimate the critic praise encountered by then by Jurassic 5. As of today, the Jurassic 5 LP is mostly remarkable as a testimony of revivalism in hip-hop, by this time, one of the driving forces in its underground.