This record of Dose One and Boom Bip is so typical of its time… Even if it wasn't released on this label, it symbolizes so well the rap deconstructionism logic launched in the late 90's by Anticon. It is bordering so much the absurd, that we are not sure we want to listen to it again, almost convinced that it failed the test of time; that today, it would sound horribly outdated; that like 99% of the people in its time, we would find it completely unlistenable. 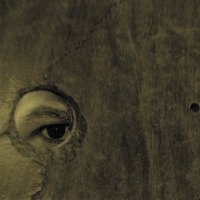 Just consider this: quite a long album, full of non-sense lyrics, unfinished and non-logical sentences, without any clear storyline, delivered with Dose One's duck-like voice, an MC who can rap with any kind of flow, or sing-song, or whistle, or say spoken word, or preach, or repeat mantras; someone who can chant, rap a cappella or philosophize whatever about Jesus Christ; someone who finally admits that, "it's not supposed to make sense".

In addition, to go with such lyrics, we had these bits of beats from Boom Bip, sometimes ethereal, sometimes brutal, and which, despite the occasional presence of some scratches, sounded more like radical electronic experiments than like boom bap. Moreover, all of these were continuously shortened or interrupted by surprises and radical changes. It had no direction, absolutely none. Last but not least, we could heart lots of unexpected sounds, like the bird songs of "The Birdcatcher", finally evolving into monkey shouts or dog barks, on a sequel of this track. Also, elsewhere, we could hear bells on "Gin", military drums and a never-ending telephone ring on the so well-named "Goddamn Telephone".

Despite this gibberish words and beats, though, despite this indigestible mixture, it still sounds quite good. It is with pleasure that we rediscover the ambient - or Brazilian, we still don't know - music of "Dead Man's Teal", the rhythmic "Ironish" with its almost unbearable bleats, a violent "Slight" which reinvents dramatically the old rap / metal crossover formula, the cute, retro and old-school sounding "Town Crier's Walk", this "The Birdcatcher's Return" which evolved not too far from the music of Them, Dose One's other project, and finally the quiet and almost normal last track, "The Birdcatcher's Oath".

Is it a matter of habit? Is this because one's ear can be educated to such inanity? Is it related to some nostalgia, to the reminiscence of an exciting time when it seemed possible again to do anything with hip-hop, including mishandling, brutalizing, raping, or even killing it? Maybe; that's possible. Also, in any case, there is absolutely no comparison between the boring prog rock Dose One has drowned in since that time, and this Circle that we can listen to without pain. This record is still cool, it still sounds fresh; in its very special way.