Turntablism! Scratches, cuts, virtuosity! This is the usual package delivered by D-Styles of the Beat Junkies, one of the best DJs from this West Coast Filipino community which, curiously, is full of experts in vinyl handling. Moreover, not content with excelling in that domain and illuminating others' records with his scratch talents, he released one of the rare albums of this kind that are listenable and exciting from the beginning to the end. 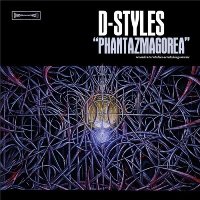 Phantazmagorea is not an immersive record, or something that stirs guts. That's not the nature of the turntablism game, anyway. But this album from 2002 has other strengths: it is continuously playful, fantasist, and inventive. It is even funny, despite the DJ's inclination for macabre beats, horror movies and laughs from beyond the grave. D-Styles knows, indeed, how to handle irony and grotesque. For example, he plays with the innumerable curses rappers usually like with the introductive "Beautiful Ugly Sound", or he associates words in unexpected ways with "Won't You Be My Neighbor", where an abstruse "he likes hamburgers and chocolate ice-creams" is catapulted in the middle of morbid lyrics.

Of course, D-Styles knows how to transplant on records pure deejaying exercises, when he starts a battle against Q-Bert one the quite good "Cliffords Mustache", for example. But he can make songs, too. Even if the record has no lyrics, but only bits of movie dialogs, the DJ knows how to place choruses, like with the astutely named "John Wayne on Acid", a blueprint for the genre. Or, on the opposite, he can get into some long, dismembered and epic finale ("Mr. Arrogant"). To bring us back to familiar lands, he also makes fun of hip-hop routines, "Like that Chall" and "Flowtation Device", and he copies MC habits when he starts some kind of DJ posse cut with Babu, Q-Bert et Melo-D, on the absolutely tasty "Felonious Funk". Last but not least, he can flirt with other genres, like dub ("Terror in Dub").

Diverse, catchy, facetious, clever, Phantazmagorea is more about fun than entrancement. However, it provides us with the best possible record for a genre usually much more dedicated to live and performances. This album is long, but it never gets boring. It is also much more than just a demonstration of skills. It delivers exactly what D-Styles promised at its very beginning: "the most beautiful ugly sound in the world".