A fierce and sinister face, the menacing look of a brute, a soldier outfit, war tanks, skulls, and a desolated landscape, all of this delivered by a Rick Ross protégé who featured once, in a video, with a mountain of cocaine. Two references to Nazi movies in the title, and a swastika (the individual, actually, has one tattooed his own body). The most outrageous lyrics ever, yelled without a pause on dirty and raw synthesizers. Yeah, you got it! Gunplay isn't too much into finesse on his Inglorious Bastard (The Prelude to Valkyrie) mixtape. And that is for the best. 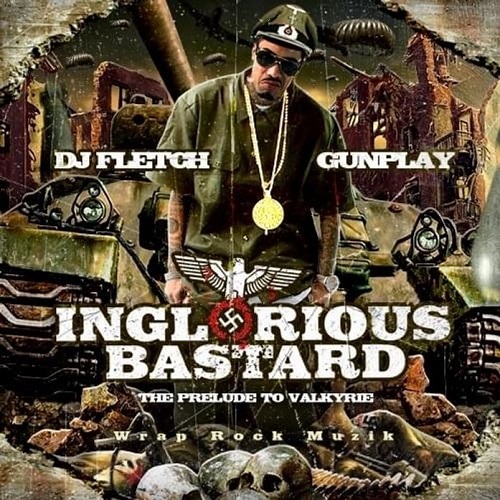 With this mixtape released with DJ Fletch, Richard Morales Jr. pushed even further the limits of the most testosterone-infused kinds of rap music. It started quite vigorously, with the noises of a machine-gun, an overly emphatic soundtrack, calls for murder, and a strong desire to be rich. And immediately afterwards, just to demonstrate what kind of heavyweight he was, Gunplay started a duo with another artillery expert, Waka Flocka Flame, on a throbbing "Rollin'" full of sirens.

After this flabbergasting track, Gunplay pursued at the same pace, he just wouldn't stop. The entirety of Inglorious Bastard was full of howling and devastating synthesizers, beats as hard and as heavy as a panzer, heathen chants, along with the usual gangsta subject matters: (glorified) drugs and delinquency, (raw, wild and macho) sex, fascination for money, violence and guns. Whoever rapped there - Gunplay with his crazy and brutish animal voice, Rick Ross and the Triple C friends, or the good old Diddy - it was constantly like that.

None of this was really new, would you argue. It was not subtle, and surely not for everyone. Indeed. And though, barbaric anthems like "Walking on Water", "On My Lap", and the memorable "Pump That Fee Up", everything – except maybe the disappointing "All On You" and Gunplay's take on Drake's "Miss Me": honestly, he is better when he appropriates Waka Flocka's "Hard In Da Paint" with "4 Loko" – is nothing less than efficient. And the closest synonym to "efficient" is: "damn good"!