There's been another Madlib before Madlib, before he became this overrated beatmaker, vaguely experimental but, to be honest, a bit irregular, and sometimes even boring and vain. In 2000, his helium-voiced alter-ego Quasimoto had released the great The Unseen. And the year before, the band Otis Jackson Jr. was part of, along with Wildchild and DJ Romes, had released Soundpieces: Da Antidote, one of PBW's Stones Throw finest records. 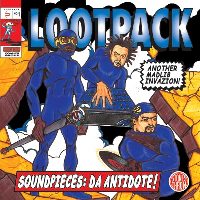 This trio's only true album was part of indie rap's first wave, by the end of the 90's, an indie rap which was still well connected with the previous hip-hop generation (protégés of the Alkaholiks, Lootpack had featured on their albums), was full of revivalists seeking to make hip-hop as fresh as before (check "Interview"'s lyrics), through battle-style raps and assaults against wack MCs, and whose sounds, whatever people said, were not exactly iconoclastic.

Even if they were produced by Madlib, even if they displayed some willingness to experiment, the beats where not too far from the usual boom bap with its freewheeling loops ("Level Zero" for example…), and this taste for strings, pianos and soul voices, reminiscent of some minor Wu-Tang Clan relocated to California ("Law of Physics", "Wanna Test"). And concerning the guests, except for the Alkaholiks, well… we had some straight and not so imaginative rappers like the Dilated Peoples and Defari. With Lootpack, to summarize, we weren't on the most delirious fringes of the West Coast Underground scene.

That being said, Soundpieces was a strong album. More than to its linear raps and one-way anti-wack anthems, it owes a lot to Madlib's work, thanks to the slow and atmospheric beats of "Questions", to the lazy mid-tempo of "Long Awaited", or even to these "Answers" and "20 questions" where Quasimoto's name appeared for the first time. Also, much more than The Anthem" and "Whenimondamic", both tedious singles, the strings on "Law of Physics" made it a great track, and "New Year’s Resolution", "Weededed" and the soulful "Wanna Test" were all quite good, and much more tasty than the tiresome loops that would become Madlib's signature, when people would name him a genius.