In 2007, Max Biggavelli was already impacted by the sordid affair which would lead, a few years later, to a 75-year prison sentence. Two years after his liberation in 2005, he was already back to jail, for having supposedly ordered a murder. This was, already, the beginning of the end. So that he stayed free until the final judgment, he had to pay 2 million dollars to be released on bail, an amount he obtained through a quick deal with his associate, Jim Jones. This agreement, though, would be the cause of the contractual and financial dispute between the two rappers, that would lead to Max B's music being embargoed. Also, since misfortunes never come singly, his friend Stack Bundles had been murdered, just one month before his release on parole. 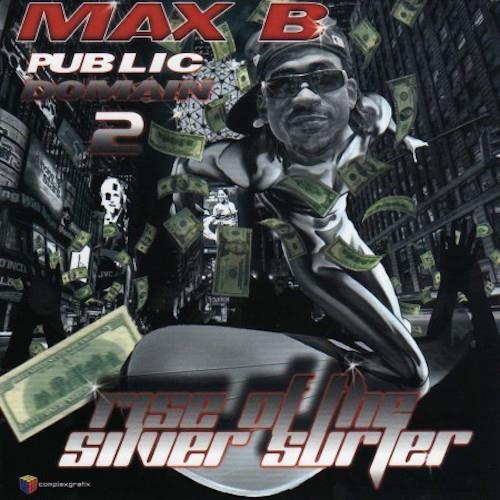 Max B was jinxed. And though, he was productive. He had just started a mixtape releases marathon, that would - almost - stop only with his final incarceration in 2009. The first two editions of the Public Domain series, as a matter of fact, had been released while he was imprisoned. And the second one, Rise of the Silver Surfer, would become a fans' favorite. Actually, due to the presence of other ByrdGang members, it was not too different from other releases from that collective. Indeed, it was full of arrogant songs and looped sample that would have done well on a Dipset album, like with "Drop That Top", or "Lump Sums", featuring Jim Jones and NOE. And some other tracks were typically from their times, like with the screwed sample on – well... – "Screwed", or the reference to Soulja Boy's "Crank That" on "Ready to Go".

Max B, though, was central to his mixtape, thanks to some peculiarities, like his sing-song, and his hissing raps. They were both reminiscent of 50 Cent's formula, but in a more plaintive and throbbing way. Also, he liked to joke, and he enjoyed bragging, and celebrating drugs ("50's of Sour"), as well as girls ("Flash Dance", "Reign", "Need a Lil Treat", "Give Dem Hoes Up", and more). The rapper, also, played with hip-hop's legacy. He sampled 2Pac on "Bring Another Ounce". "Thug & Harmony", was, expectedly, influenced by the same-titled band. And he named another track after De La Soul, where he appropriated one of the trio's most iconic songs, "Ring Ring Ring", changing it into an ego-trip. Max B was at the top of his talents, and he would use them again, on many other mixtapes, before being sentenced to a too long silence.