Last year, Lonnie Bands from Detroit's BandGang released KOD, one of 2019's remarkable rap albums. A track on this project was "Detroit to Inglewood", a very strong posse cut underlining the many connections between the Midwest and Californian scenes, featuring people like Drego & Beno, and, on the West Coast side of the guest list, Ice Burgandy. It was nice hearing him again, considering that the only recent news about him related to the sordid death of his old friend Rosemo, after a beef with the rappers The Game and Boskoe. Apart from this, this Bloods affiliate appeared to have dropped rap for a good reason: he earned no revenue from it. But then he resurfaced, exactly as before, far away from his Californian base in Inglewood. 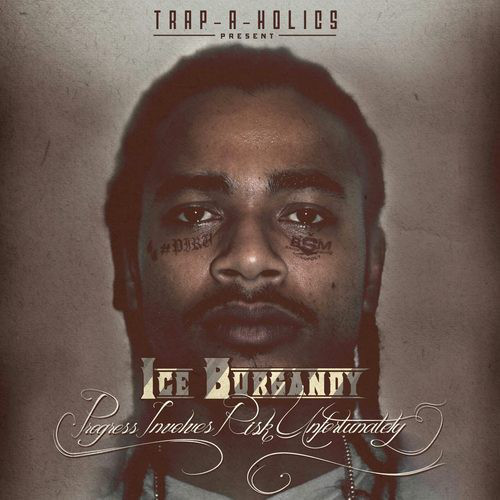 Ice Burgandy, indeed, had previously been an affiliate to Atlanta's 1017 Brick Squad collective. In 2012, he even released one of the many anthological mixtapes recorded by Gucci Mane's band, a project named Progress Involves Risk Unfortunately. The guy in that group he was the closest to, actually, was Waka Flocka Flame. He was enrolled by him into his Brick Squad Monopoly subdivision, along with some other local rappers, after a trip the guy had made to California. He had featured on "Homies", one of Flockavelli's tracks, and Waka Flocka was very visible on his own mixtapes. On Progress Involves Risk Unfortunately, however, the man from Inglewood was unquestionably the main star, along with Purps from the 808 Mafia, who produced all of the mixtape, except for contributions from Southside and Lex Luger.

The main subject matters were those expected from a Brick Squad folk. It was all about drug stories, told from the dealer or the consumer perspective. And in addition to these, the rapper had a few lyrics about cars, money, clubs, and girls. Ice Burgandy's, though, imported from California a laid-back attitude, and better lyrical skills than most of his Atlanta peers. Also, except for the dispensable "My Benz", a track produced by Lex Luger and featuring Waka Flocka, he didn't limit himself to the devastating bangers these two were famous for. Some songs were relentless, like the gang anthem "Right Side Hangin", the pack celebration "Northside Rose Mo" – one of Southside's contribution –, the proud "Troublesome", or "Warrents". But others were slower and more insidious, like the melancholic "Death around the Corner", or the dealers' song "PMBB", probably the highlight on the mixtape with its screwed hooks, in case one needs to be identified on this remarkably strong and homogeneous release.