Kate Tempest represents another tradition in UK's rap scene. The one, as a matter of fact, which is not really about rap. The one from other Brits connected to hip-hop, like The Streets, but also from people unrelated to it, like John Cooper Clarke, the punk poet, Kate Calvert worked with. This is the spoken word tradition. This is also a socially conscious kind of poetry. Tempest sees herself as a rapper, and she started in a hip-hop group, Sound of Rum. But she has more to do with literature than with music. As is happens, she is also a playwright and a novelist, and she is a favorite of the cultural elite, who rewarded her through various prizes. 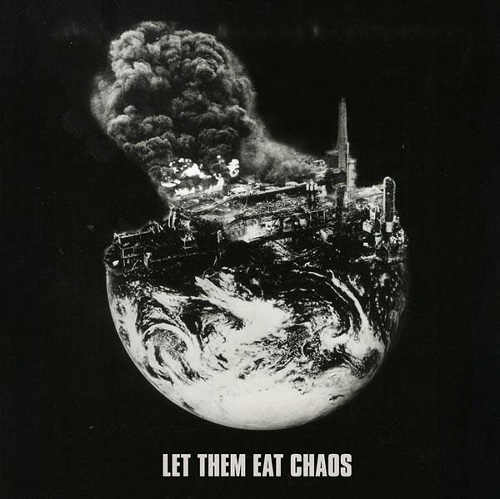 That kind of recognition could be dubious. Quite often, such praises reward the artistic approach, more than the final product. What is celebrated is an ambition, or a pretention, more than the actual work. And such ambition is very visible on Them Eat Chaos, Kate Tempest's second album. It starts with a poem recounted on dry beats, "Picture a Vacuum", that smells of experimentalism. And its narrative is rather conceptual. The story, indeed, starts on "Lionmouth Door Knocker" with a general view of planet Earth, that progressively focuses on London and some of its inhabitants. Then it turns into some social commentary, through the description of seven neighbors who, when a storm impacts their lives, get to know each other.

All these characters are impersonated by Kate Tempest over a series of monologues. Each of them, one after the other, reviews his or her life during times of insomnia. One can't cope with the death of her partner ("We Die"). Another one is a party animal, drinking his monthly wage in one go ("Whoops"). And a third feels that life is a failure ("Pictures on A Screen"). All these people are all self-centered. They overconsider their personal problems and miseries. But through them, Kate Tempest addresses more fundamental issues. The main theme on Let Them Eat Chaos, which title comes from famous – and apocryphal – words from Marie-Antoinette ("let them eat cake"), is about the individualism and isolation of ordinary citizens. It is about the void of Western civilization on "Europe Is Lost", its disregard for the rest of the world on "Tunnel Vision", or the deadly gentrification process in London, on "Perfect Coffee".

Substance matters. But the format skillfully serves it. Whenever relevant, Kate Tempest's tirades turn dexterously into melodies, or into something much closer to proper raps. They are self-sufficient, as demonstrated with some a cappellas. But the synthetic music that dominates most of the album is also appropriate and efficient, from the bouncy "Whoops", that looks designed to a grime rapper, to the inspired "Perfect Coffee", and the atmospheric "Pictures on A Screen". And at times, with equal success, it is supplemented by more organic sounds, like with the guitar and drums on "Europe Is Lost". Beyond the concept, in addition to her clichéd criticism of individualism, all her intellectualism set apart, Kate Tempest does good music.