The main doll, the most visible of them all, is Arkeisha Knight. Discovered through a remix of Tinashe's "2 On", and then through her take on AV's "Run Me My Money", she's been seen alongside people from her own city, Detroit, like Icewear Vezzo and FMB DZ, but she also worked with more famous people, like B.O.B. and Trina, who featured on Keisha Vs. Kash Doll, her first mixtape after she joined BMB Records. Later on, she also collaborated with Drake, Metro Boomin and Big Sean. Also, she was supposed to feature on a YG song, before that one, "She Bad", went to Cardi B, which ignited a short conflict between the two ladies. These two had much in common, though: both of them had been strippers, before turning into rappers. 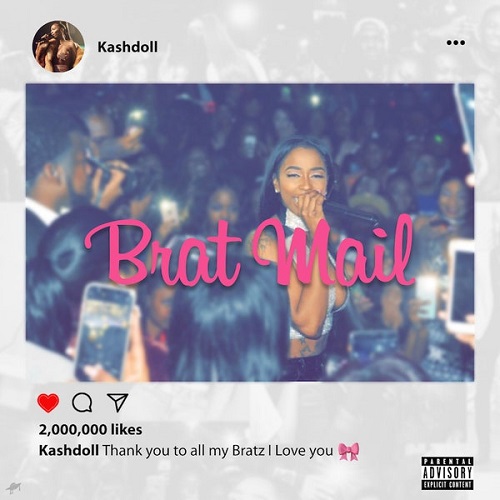 As a matter for fact, Kash Doll's posture on Brat Mail, her 2018 mixtape, is the same as the New-Yorker's: she celebrates her success, on musical formulas coming from Atlanta, more than their respective cities. "Dancin", for example, is typical of the A-Town with its absurd anthem to luxury brands and other signs of wealth, and the little melody from Zaytoven. The same goes with "I Want" and "Rich Talk", two duos with Scrilla. On "Serious", with a hook from Natasha Mosely, the rapper explores a similar theme, claiming that she prefers riches over men. Everywhere on the mixtape, Kash Doll shows why she is called that way: she is the doll who likes cash money; preferably in seven-digit numbers, as she says on "Dividends".

Kash Doll's objective, on this short 22-minute project, is to celebrate herself. From the introductory a cappella through the project's best track, "Check", she delivers good old ego-trips. With the Instagram-like cover art of her mixtape and its two millions "likes", and with the praise she gave to her fans during the 2017 BET Hiphop Awards ceremony, she included to the end of Brat Mail, Kash Doll enjoys her notoriety on social networks. On this project released on March 14, the very day of her twenty-fifth birthday (also the twenty-fourth anniversary of her father's death…) the rapper from Detroit does a bit of self-persuasion: she is not the superstar she fantasizes about, she is not that famous yet. But of course, it absolutely doesn't matter.