On the west side of the US, is the West Coast. But further west, there is Hawaii. Laura Yang, a.k.a. Neila, is from there. Nevertheless, it is actually the Californian rap scene she is associated with; or more precisely its underground subset the rapper, DJ and producer Deeskee used to organize around his LA2theBay website. Neila made a first appearance in his entourage, when she contributed to the best song on his Blacklight Sessions album, the nice "The Dream". And since then, she never stopped releasing music, until her recent Analog Jewelery in 2017. 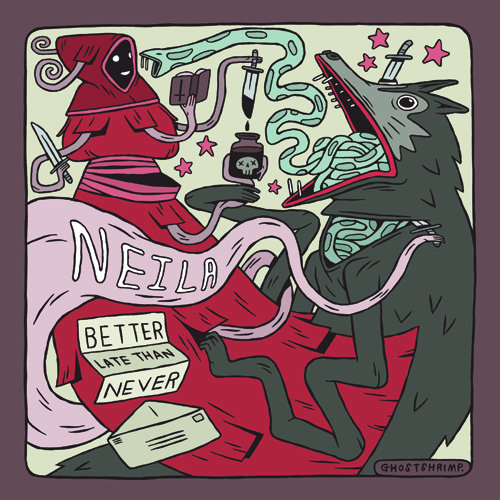 Neila even improved, over time. Her best days, ironically, happened when she struggled against a cancer impacting her vocal cords, around the year 2010. Better Late than Never, an album supported once again by Deeskee, testifies of this. Produced by Avatar, and more marginally by Life Rexall from the Shape Shifters, it had a good balance between sinister songs ("Snake", "Murder", "Maybe", "Anything") and more joyous tracks ("Grab More", "Better Late than Never", "Seatbelt"), which all used samples – a practice still popular on this peculiar rap scene. That album was the first the rapper had released after five years of silence, and her health conditions seemed to impact her, already. She sounded a bit like a crone, which accentuated the sadness of her lyrics, she mostly dedicated to her heartbreaks and relationship issues.

Better Late than Never benefited from the proper support. Its most memorable moments were those with representatives from the underground network Neila was affiliated to. Such was the case with "How It Is", an upper tempo track supported by a children choir, DJ Esp's scratches, and the raspy voice of Awol One. Such was the case, as well, with "Monster", with another semi-legend, 2Mex, and with "Earthquake", with Matre, another member of the sprawling Shape Shifters collective. The main dish, though, was the conclusive "Mercy Refused", a relentless posse cut with a dozen (or more) underground figures like Existereo, Xololanxinxo, Project Blowed veteran Volume 10, and even, straight from the East Coast, Company Flow's Bigg Jus.

Beyond Neila's own case, this track looked like a swansong for what used to be a huge rap scene. By then, it had lost its shine; critics were no longer interested. For the Hawaiian rapper, though, this was one more step: the next album, named appropriately Only this One Counts and marked by her distress and health condition, would be her most intimate and intense.