This is an implicit law in rap music: at one step or another of its story, any major collective must have a female member. One of these crews, however – and not the least – had been an exception for quite a long time: Gucci Mane's 1017 Records. It took them a decade, no less, to comply with the rule and to have a femcee. The chosen one was Misharron Allen, a Dallas rapper better known as Asian Doll - though she is not asian. Her first project, Da Rise of Barbie Doll Gang Empire, was released in 2015, but it was with another one, a year later, that this lady started making noise: Drippin' in Glo. After this album, she would feature with PnB Rock and Famous Dex – her lover, according to rumors – and she would be praised by Nicki Minaj. 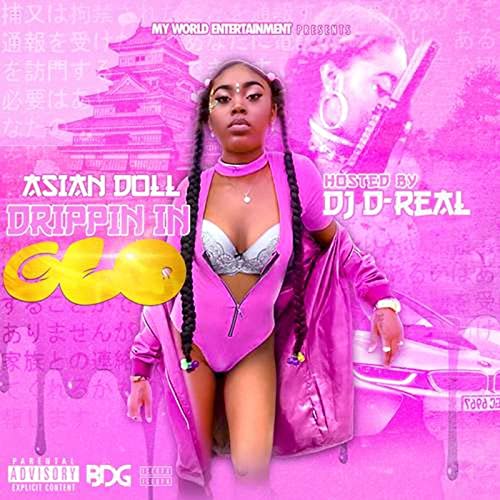 Nicki Minaj's support was everything but a surprise. Like the other "dolls" in the rap game, Asian Doll is one of her heirs. Like her, the self-titled Queen of the Teens is a fashion victim. Fascinated by the Barbie doll, she has a passion for flamboyant and extravagant looks. Like Minaj, also, she shows herself as a dominating and hot-tempered woman, she is not shy with sexy poses, and she had a few beefs with other female rappers, most notably Cuban Doll, Bali Baby, and her previous collaborator Rico Nasty. Asian Doll has a colorful personality, which was already fully developed on the twelve tracks of the dense and compact Drippin' in Glo.

"Barbie gang everywhere", Asian Doll said on her manifesto "Barbie Everywhere", the central piece on this mixtape. The most important word in that short sentence, though, was not the first, but the second: "gang". With her irresistibly simple melodies, her anthems to money ("Franklins", "All My Life"), her crazy gang stories ("Shooters"), her death threats ("Power Up"), the over-the-top ego-trip she declaimed on the music of Kodak Black's "No Flockin", her preferences regarding her sex partners ("Like Me"), and her menacing and armed poses in the videos of "Chess" – a collaboration with her Dallas fellow Maserati Ye – and "Barbie Everywhere", she followed the steps of her future sponsor. Considering her flashy kind of gangsta rap, Asian Doll fully had her place among Gucci Mane's joyous band of bad guys.