Originating from the city of Mobile, Alabama, Rich Boy started making some noise in 2006 with "Throw Some D's", a single about his new Cadillac – a luxury car he had seemingly bought with dirty money. The following years, to keep the momentum, Maurice Richards – his real name – featured on mixtapes from more notorious rappers like Ludacris, or beginners like a certain Drake. And also, he released a first album, which would become a moderate success. What needs to be retained from his discography, though, is his 2008 Bigger than the Mayor mixtape, he released to herald a second opus, Break the Pot, that would finally be delayed to 2013. 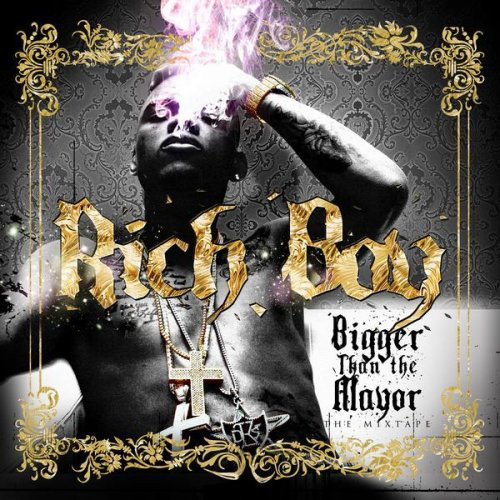 Bigger than the Mayor was typical of its times. It was entirely dedicated to celebrating Rich Boy's existence as a drug dealer. It was about riding dirty, wasting money in the flashiest ways, and paying a tribute to strippers. The Alabama rapper knew whom to solicit to complete such a project. He chose the right men or women, like Yo Gotti, Shawty Lo, Trae, Jacki-O, and the essential Gucci Mane. The latter featured on three tracks of this project, no less, including the brilliant "Ms Pacman". Due to a beat quite typical of his partner in crime Zaytoven, it looked like a track from one of his own mixtapes. Oh wait, "Ms Pacman" actually featured on one of them!

Considering that mixtapes and albums were still different things at this time, the most noticeable fact with Bigger than the Mayor was its consistency. It had almost no filler. Even the tracks not looking like proper songs were solid, like the closing one, where Rich Boy paid tributes to all rap scenes in the US – and more particularly those in the Deep South. Built around a sample of Guwop's "Freaky Girl", the first real track, "Wrist out the Window", was no less than a banger. The thugs hook on "Chevy a Monsta", an anthem to drug dealing, was devastatingly good. His reportage about criminal life on "Out the Hood", along with Yo Gotti and All-Star – the future Starlito – was worth Jeezy at his best. Rich Boy only disappointed when he turned mainstream, like with "Haters Wish", or "Ghetto Queen", the expected R&B tracks, supported by Lloyd's voice. The rest was rock solid. Later on, a CD rerelease would confirm the real nature of that mixtape: it might have been the best project ever, from the Alabama rapper.