Things are going fast, in rap music. Chief Keef's fate is a proof of this. Five years earlier, in 2012, he was on the verge of becoming the master of the world. The big thing, by then, was Chicago's drill music, and the young rapper was incontestably its figurehead. Multiple media talked about him, as many labels courted him, and he had the opportunity to release a popular album. One year later, he joined Gucci Mane's 1017 Brick Squad crew, he featured on Kanye West's Yeezus, and even Lou Reed praised him. But suddenly, it was over. Chief Keef had to deal with judiciary issues, he was dropped from Interscope, and after having built his success out of a populist stance, he turned more or less experimental. He even left Chicago, he announced he would retire from music, and he didn't release any project in 2016. 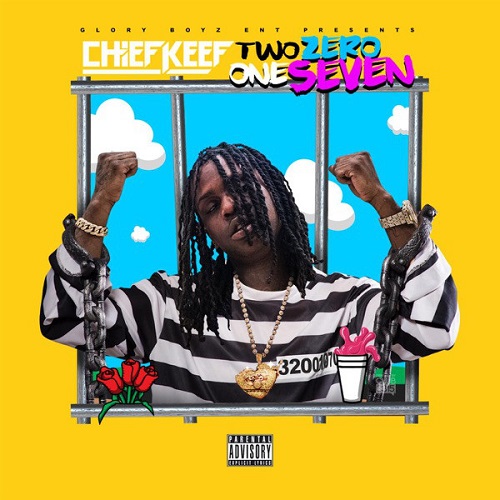 2017, though, was another story. In the very first day of the new year, he released a mixtape named after it. And this release, its lo-fi sound and approximate mix put aside, happened to be quite good. Chief Keef, it is known, is not a lyricist. He is something superior: he is a musician. He has an excellent ear, which allows him to put together a curious mix of sing-songs and harsh words on "Fix That", and to make these sound cohesive. He is less belligerent than before, and sometimes he is singing some strange and frail songs, like with "Falling on the Floor". Even his "bang bangs", his signature, sound soft and susurrated. But still: his tired, worn and aged tone is as impactful as his brash lyrics of yesterday.

Chief Keef covers most of the production work, along with the loyal Young Chop, and another star on the decline, Lex Luger. Almost no-one is invited to rap along himself, except Tadoe. And though, Two Zero One Seven is super diverse: "Short", "Go", and the outstanding "Stand Down", are supported by a trap music artillery; the melody on "So Tree" is catchy, as well as the relentless piano keys on "Dope Smokes"; and there are a few indolent tracks. The rapper and producer plays with various colors. He also has a great idea: inserting, in the very middle of the project, just after its best half, the atypical "Hit the Lotto", a song sung with Auto-Tune, with the support of his only other guest on the project: his own sister Kash.

In the year Two Zero One Seven, Chief Keef is no longer the center of all attentions, but he is as relevant as ever. He released something like twenty projects in his career, went through a series of mischief, got three or four more or less official children, and developed a passion for painting. And though, in addition to all of this, he started the year with one of its best project. And the guy is only 21. There are people like this, offering to themselves full and exciting lives.