Though he was more visible than others, DJ Shadow has never been a lone wolf. Even before his fame and the monumental Endtroducing… album, he was a part of Solesides, a label from the Bay Area, the very place which, after pioneers like Del or Digital Underground - and in parallel to the more scandalous rap of Too $hort or E-40 - had birthed one of the most creative hip-hop scenes from California. 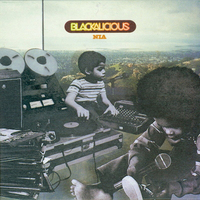 The other members of the crew were Lateef the Truth Speaker and Lyrics Born, a.k.a. Latyrx, and Chief Xcel and The Gift of Gab, from Blackalicious. However, and despite a few anthological songs like "The Quickening", "Balcony Beach", "Storm Warning", "Jada's Vengeance" or "Bombonyall", it took years before the Solesides artists – renamed the Quannum collective in the early 2000's – released their opus magnum. Spectrum, indeed, their first album, was uneven. And though Latyrx's soberly titled The Album was strong, it was more a compilation than an album.

Recorded after two outstandingly good EPs – the cult Melodica, in 1995, and A2G, in 1999 – the first Blackalicious album was the first true masterpiece ever released by the solesides crew. Their playful and diverse kind of rap, indeed, was constantly good on Nia. Most tracks were on par with the brilliant "Deception", which had been the lead single on A2G. While The Gift of Gab, both a conscious rapper and a fantasist, played with all kinds of flows – he could even sing, sometimes seconded by Erinn Anova's voice, like with the splendid "If I May" – and demonstrated his lyrical versality, like with the acrobatic "A To G", Chief Xcel displayed a funky sound, reminiscent of the hip-hop collages from the 80's. His beats were so powerful, actually, that they would appeal to other people than the usual rap fans.

The duo excelled at everything. Thanks to the old school influenced "The Fabulous Ones", the magnificent soul music of "If I May", the weird "Cliff Hanger" (produced by DJ Shadow), the ballads "Shallow Days", "As the World Turns" and "Sleep", or angrier tracks, like "Trouble" and its crazy turntablism finale, Chief Xcel and The Gift of Gab delivered the accomplished record expected from Solesides. In Swahili, "Nia" means something like "goal", or "objective". For sure, Blackalicious reached their own with this almost homogeneously fantastic album, an album which might still be the best entry point to this kind of alternative hip-hop born in the Bay Area.