Originally a gang of Puerto Rican hustlers, the Lo-Life Founders never tried to record any masterpiece. Despite their excellence on the mic, rap has always been some hobby to them, more than something they really invested in. Though Thirstin Howl III, their figurehead, did feature on Soundbombing II, and collaborated with the likes of Eminem and Mos Def, he never delivered anything more than messy and practically unsalable records, available on obscure labels. 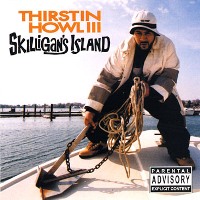 Skilligan's Island looked like an exception. Now released on a real label, Landspeed Records, this fourth album was remarkably well distributed. The content, however, was as amateur as always. Actually, it looked more like a mixtape, inclusive of beats stolen to other artists. It was exactly as usual, which was expected, since this record was, basically, a kind of best-of. Those only familiar with "Brooklyn Hard Rock", thanks to Soundbombing II, would discover there a collection of tracks – most of them great – already released on TH3's previous albums.

It was the usual cocktail, the formula Thirstin Howl III, along with his Lo-Life homies – especially Rack-Lo, Unique London, and Master Fool – had vulgarized on his past releases. Some of his very best songs were there: "Stole", "John, they’re Stealing", funny accounts about his thief background; "I still Live with my Moms" – his had just died, unfortunately, judging by the cover notes; the hilarious lesbian fantasies of "I Wanna Watch", where he competed against a woman at sexually satisfying another lady. And of course, across all of these tracks, Thirstin Howl demonstrated again the Lo-Life persisting passion for Ralph Lauren polo shirts…

All of this was delivered with the rapper's typical tone: both comical and tearful. And the beats, original or stolen ones, were on par with the lyrics: they were not particularly subtle or delicate. Maybe these were the reasons why Skilligan's Island, while focusing on Thirstin Howl III's very best, was not too different from his previous records. Even his best-off was an eclectic jumble. The Lo-Life would always remain the same: uneven, delirious and patchy, but totally indispensable.