No Doubt: for most underground rap fans, the Wu Tang Clan of the Pacific Northwest is Oldominion. The region, however, has another talented collective. It is based in Portland and called Sandpeople, and it is every bit as creative and good as Onry Ozzborn's own crew - with whom they are sometimes collaborating. Of course, as for their colleagues, their discography is a bit complex and confusing. Honest Racket, though, is certainly the best and easiest entry point to their world. 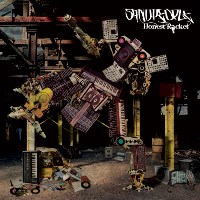 With its 16 tracks, recorded by a multifaceted band with more than 10 members – notwithstanding the contributions of The Grouch of the Living Legends, and Sean Price from the Boot Camp Click (two other sprawling collectives) – the record is a bit uneven and eclectic. Its songs are not all masterpieces, and it looks sometimes like a compilation. But still, thanks to the great work and collaboration of the two beatmakers, Sapient and Simple, it is as satisfying as expected with a true album.

Honest Racket owes a lot to this duo. Sapient and Simple have been able to deliver something as diverse as the heroic beats on "Industrial Grade", "All In Your Head", and "Air We Breathe", the strings on "Real Estate", the lively piano on "Lose It", and also the gothic ambiance of "Sandman" and the melancholic guitar on "I Don’t Care". It is catchy, and deployed with science and talent. The only weak contributions are the sluggish "Group Home" and "Just a Name", the piano on "It’s True", the lalalas on "Leave It Alone", and the lazy organ on "Not Alright".

As far as the raps were concerned, it also worked quite well. iLLmacuLate, the winner of the 2004 edition of the Scribble Jam, and a late joiner, brought to the mix a welcome dose of anger; and his pals weren't bad neither. Expectedly, it was all mostly made of battle rap. It was full of ego-trips, or diss tracks. They were there to represent, as with "The Count", or they would use a random theme, real estate for example, as a pretext for wordplays. At times, though, their lyrics would be more personal. They would talk about the pains of an amateur artist ("Lose It"), or a lost love ("I Don't Care"), or be straight confessional ("Not Alright").

Sometimes, also, Sandpeople would philosophize about religion, or the flight of time, or oblivion, or the way of the world, on highlights such as "Any Given Sunday" and "Forget". They would even sing on the tale "Synthetique Princess", a cute story about a virtual love. There was all of that, on Honest Racket, a rich, diverse and satisfying album, which smelled strongly of intelligence and talent.