According to the presentation of their 2000 joint album, Electric Third Rail, San Francisco's beatmakers Octavius (William Marshall) and 4AM (Jason Chavez) tried to translate in music the overall sounds, rhythm and ambiance of the city; not only their own city, but all. And actually, they roughly managed to reach their goal. 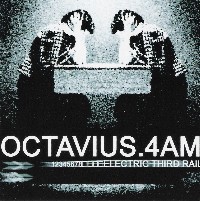 Their record, indeed, is plenty of dense, heavy and foggy sounds, so much that it is difficult to separate one track from the other. It is full of electronic dissonances and arrhythmias. This is not a purely ambient music album, though. Here and there, one can hear a more audible sample, a light dub ("Blues for Darkened Corridors"), the beginning of a melody, the guitar of The Sleepover Disaster's Taron Barefield, the presence of Meat Beat Manifesto's John Wilson – the only "celebrity" contributing to this album – and sometimes, a few raps. This haunting and swampy music was remarkably homogeneous, but though, some tracks were stronger than others, for example "A Cure", "Blues for Darkened Corridors", "Modern Chairs", and "Locust from the Bottomless Pit"), with its great bass.

Electric Third Rail, actually, was a product of the shared history of two unusual rap fans, who, by the end of the 90's, decided to challenge their favorite music.

Anything can be said about this elusive and unclassifiable record: for example, that it is the result of a merger between rap, indus, noise and ambient music; that it is a hip-hop version of My Bloody Valentine's Loveless; that it is the dark and claustrophobic side of cLOUDDEAD, whose first tracks were recorded by the same time, not too far from there. Any comparison would do, as long as it is laudatory.