Later on, Thavius Beck, a.k.a. Adlib, would become a bit more famous. A previous member of the great Californian collective Global Phlowtations, the beatmaker would finally become a bit more visible, beyond the West Coast Underground hip-hop scene, thanks to his presence on Mush Records, and his collaboration with Subtitle as part of the Labwaste duo. Some of his best works, however, had been released much before this era, for example the albums he had produced by the late 90's / early 00's for Inoe One, also called Inoe Oner; among them, Master Realm, Millenium Conductor and, above all, the great Governments Greatest Hits. 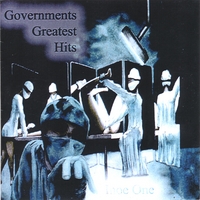 By listening to it, someone could think that this short and DIY-sounding album was unfinished. It was, however, more accomplished than the above-mentioned releases. It looked more like a real album, thanks to its homogeneously cold and weird feeling. With the recurrence of the "We'll Never Change" track, which opens and closes the record, it looked like something thought and conceived as a whole. Most importantly, it benefited from what, across the ages of hip-hop, has always been this music's key success factor: a perfect alchemy between the rapper and his beatmaker, each of them being as bold and imaginative as the other.

On "Real Mazoid", Inoe's lyrics were as much a gimmick as Adlib's bizarre loops. The same went with "Itz Whatz Needed", though the skeletal beat and the continuous repetition of the same few words were even more extreme. A bit later, the MC would go a capella on "Long Walk". And the robotic "Hidden Song" would recycle the first words of Eels' "Novocaine for the Soul" ("Life is hard, and so am I"), in a smartly heavy way. It was full of ideas, and of course, utterly unusual and experimental. And though, it wasn't too abstruse. On the opposite, Governments Greatest Hits somehow deserved its title: it could be highly seductive and catchy.

One track, though, was so classy that it dominated all others. Blessed with Inoe's nonchalant flow, a great beat from Adlib, and the clever contrast between too organs, one driving the rhythm, and the other a cold melody, this gem was called "Da Ole Me"; and it should be celebrated as one of the 20 or 50 best rap tracks ever. I mean it. But the history of music is unfair: Inoe One, Adlib and their fantastic Governments Greatest Hits never collected the praise they fully deserved.