Justify the Mean$, is not only a record from Luckiyam. It also belongs to the man to be called Gandalf, when talking about the beatmaking side of his artistry. In addition to rapping on it, Eligh, indeed, produced the integrality of the album, and this contribution was decisive. It transfigured the ingenuous but rather expected raps of Luckyiam. It saved his commonplace themes, by offering something more than the usual repetitive loops. Actually, rarely have Eligh's typical beats - a mix of cool jazz and synthetic sounds - fit so well with the lyrics of one of his companions. 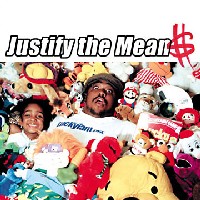 Whatever Luckyiam shared on Justify the Mean$, be it his vision about his career ("Highway Serenity", "Watch What We Say"), critics about other rappers ("Can’t Deny This", "TakingovaDis"), confessions about his frustrations ("Unsatisfied"), his flaws ("Not Perfect", with Tenashus, who had also collaborated with Blackalicious) his difficult relationships with beloved ones, or a few considerations about his fatherhood, or weed ("SmokeOUT"), when he went through some kind of ego-trip in a soft way ("Come Along") or in an angrier one ("SHUT UP!"), Eligh always found the right beat. He confirmed his talent for identifying the right details, those making a difference, like with the sudden drum'n'bass sounds on the languorous "Highway Serenity" and "Play this", or the habile voice sample on "Come Along".

This album was admirably produced. Luckyiam, though, didn't escape the usual flaw with the Living Legends: he was much too long, and too wordy. This is the very reason, actually, why it is so difficult to identify a masterpiece in the large discography of the Californian crew, both he and Eligh belong to. Even their very best records are full of fillers. This time, however, despite its 72 minutes, Justify the Mean$ was rock solid. Only a very few tracks, like "If I Do", were a bit boring.

Ah, and also, the record ended with "Fuck Heroes".

"Fuck Heroes", my goodness! At first glance, this was just another posse cut, this old hip-hop tradition, which results frequently into a never-ending litany. But this specific posse cut, featuring Eligh, Murs, Sunspot Jonz and Slug – ah, this Slug, what a rapper! – we would wish that it lasts forever. We would wish that this loop, these few strange and catchy musical keys, these drums, these scratches and the five people rapping over them, just never stop. We would wish that the closing "bye bye" of Luckyiam's daughter revolves into a: "hey guys, let’s start it again".