This is a recurring debate, though a rather quiet one, and it exists since the very day Entroducing… was released: is this crucial album of the 1990's decade as great as its reputation says? In other words, is it really a classic? To some, asking this may sound like a lost battle, this record being regularly listed as one of the best pop music albums ever. Questioning this is a provocation. But still, it is legitimate. 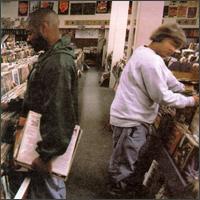 The influence of Endtroducing... in unquestionable. With the singles "In/Flux" and "Lost and Found", and then with his first album, Josh Davies unilaterally invented instrumental hip-hop; the true instrumental hip-hop, and not just a few boring loops, with the lyrics removed. The DJ enacted the genre's canonical form, its major benchmark. Years and years after, Endtroducing... is still the core standard for all abstract hip-hop. There is no way to ignore it, when one just plays with beats and samples. Even the Guinness Book of World Records acknowledged it, when it claimed that it was the first album ever, exclusively made of samples.

With this record - and also with Mo'Wax, DJ Shadow's label at the time - borders became fuzzy. The 90's, indeed, had stratified modern music into separate genres: rap, techno, and what was still called rock music. This DJ, however, defied such categories. He had a clear hip-hop background, but he was mostly liked in electronic music circles, and welcomed by all others. With Endtroducing..., actually, DJ Shadow predated the future, and the general blurring of all genres. As so many others, he despised the "trip hop" label, but he was, actually, this genre's true godfather, and a champion of its core principle: mixing, everything. Also, as the ultimate hip-hop crate-digger, when recycling some forgotten records, through samples, he heralded the nostalgia for past music that would define the early 2000's, when Internet and the MP3 would accelerate the rediscovery of the past.

Endtroducing..., also, announced the indie rap times. In reality, most indie rappers from the late 90's hadn't listened to it. But it had influenced many, at least indirectly. Though he was coming from a multiracial background – the tanned skins of Chief Excel and Lyrics Born on the album's cover art showed it – Josh Davies was defining new rules for White hip-hop: not only because of his own skin color, but also because he removed rap from its birth context, from its social womb; it had more nuances, and no longer oscillated between bliss and furor; it was getting all "progressive". With him, hip-hop was mutating into a brand new thing, which could even sound catchy and familiar to fans of rock music; also, last but not least, DJ Shadow's main objective seemed to create some real piece of art.

But did he really manage to build such a masterpiece? Asked differently, what is the true value of Endtroducing..., beyond its impressive influence and posterity?

There is no need to play the hater. This album would never have been so impactful if, in addition to being original, it hadn't been good. Many, afterwards, would damn themselves to record tracks as powerful as the best ones: the real introduction that "Building Steam With a Grain of Salt" is, with its heavy rhythms, many scratches and eerie voices; the epic "Stem / Long Stem", which disclosed the recurring themes of "Organ Donor" and "Midnight in a Perfect World", in a very jazz way; the suave conclusion of "What Does Your Soul Look Like (Part 1)"; and also, most of all, the pinnacle that was the sumptuous "Midnight in a Perfect World" – undeniably a trip hop song, despite DJ Shadow's contempt for the genre.

Compared to those, however, most other tracks paled into insignificance. Some were fillers ("Napalm Brain / Scatter Brain"), or this kind of lounge music, abstract hip-hop would ultimately evolve into ("What Does your Soul Look Like (Part 4)"). Or sometimes, they were promising tracks, just badly spoiled by too many artifices or too much showmanship ("Changeling / Transmission 1", "Mutual Slump").

Some would argue that such tracks were necessary pauses, and that a uniformly intense album would have been much too exhausting. But the reality is that Endtroducing... has flaws, though it earned its place and status in the history of pop music. Ironically, six years later, DJ Shadow would finally deliver a close-to-perfect record, The Private Press. But by then, the abstract hip-hop revolution would be over, and this album would be considered as a pale replica of the first one, a record forever considered, rightly or not, as Josh Davies' magnum opus.