By the end of the 90's, Buck 65 was a central radio DJ, rapper and producer in Halifax, Nova Scotia. He was also a White man, a Canadian, and he had grown by the countryside. As a result, he was everything but your typical MC. No big surprise, then, if Vertex proved to be quite unusual as well. Previously available on a cassette, and later on as a CD, this album was atypical. Actually, it fulfilled the promise to revolutionize hip-hop, made around the same time by Anticon - a label Buck 65 would become affiliated with. This rapper, though, would achieve this goal while using the genre's usual ingredients: raps, scratches, samples and loops. 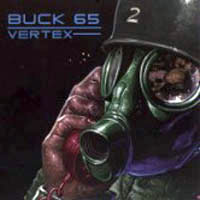 Vertex was a series of strange and experimental – though not pedantic – songs. The album was entirely made of cloudy and atmospheric tracks, mixed with long and stretched scratches, which the rapper and producer made even more confusing, by splitting them into movements, inclusive of instrumental phases. Also, Buck 65 liked to mix hip-hop with unusual influences: contemporary music, for example Pierre Henry's Messe Pour Le Temps Présent – later on, he would show some remorse for using such obvious samples – or the glam rock of Roxy Music, with his bizarre cover of "In Every Dream House There is a Heartache".

Buck 65's voice was rather quiet and controlled. He spoke, more than he rapped. His lyrics could be alternatively dreamy, or funny ("stupid DJs would give their right arm to be ambidextrous"), or they could celebrate base-ball, a sport the rapper used to practice at a high-level. Among the prominent tracks, there was the "The Centaur" of course, a parable about a guy with an enormous sex, courted by the porno industry (actually, a tale about the state of hip-hop). But there were also a few others, like the organ on "The Blues Part I", the majestic "Bachelor of Science" and, even better, the ethereal scratches and piano on "Sleep Apnoea".

Thanks to the hype about Anticon, Vertex would help enlarging Buck 65's audience beyond Canada. He would be a figurehead of indie rap, and represent each of its multiple trends, all along the 2000's. He would deliver a kind of emo rap, some folk and hip-hop crossover, and he would collaborate with an electronica artist. He would even release a Serge Gainsbourg-influenced album. And all of his projects, the commercial as well as the underground ones, would be an exciting journey.