The triumph of rap has not always been beneficial to the DJs. While the MCs were becoming stars, they were pushed progressively to the background. And then, with the recording tools and methods becoming more and more advanced, they were replaced by the beatmakers. They didn't disappear, though. They continued to deliver live shows and DJ battles. They created the turntablism movement, and pursued this tradition of composing music by manipulating vinyl records. 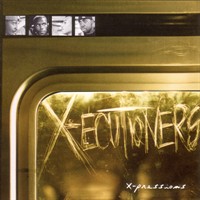 By the end of the 90's, the DJ discipline was represented by some legendary groups, like San Francisco's Invisibl Skratch Piklz à, L.A.'s Beat Junkies, and New-York's X-Men, later renamed the X-Ecutioners. Most of the time, however, these people's records were not as impressive as their shows. It was obviously a challenge, to translate on records DJ battling, an art as much visual, as based on sounds, and very clearly designed for live experiences. X-Pressions, though, the very first true album – not a mixtape – recorded by a group exclusively made of turntablists, was satisfying enough, just with the virtuosity displayed on it.

All four DJs were having fun, with their showers of scratches. Some unknown MCs were sometimes rapping; but the true stars here were our four turntable heroes, only them. "Word Play", for example, was one of these rapped tracks. However, per its title, the aim was more to play with words, and flood them into scratches, than to tell a story or to make sense. Actually, the rapper just listed the name of each X-Ecutioner, allowing them to display successively their incredible skills.

Elsewhere, with "The Turntablist Anthem", a feminine voice exhorted our turntablists to scratch endlessly, and obviously they got the message, the core of the track being made of vinyl manipulations again, with just a nonchalant groove in addition. And with "The Countdown", the guy was just counting, on a music made of small scratches, a big bass, and the light touch of a harmonica, before everything went crazy, thus opening a series of purely instrumental tracks.

These were not all made of scratches. "Pianos from Hell", for example, was a languorous and cinematic track, an ambiance, underlined by a slow and relentless beat. Pure turntablism could get boring, on a record, so the group was providing a larger set of music, on this sometimes uneasy and difficult, but rewarding album.