In 1999, Madlib had introduced us to his alter ego, Quasimoto, on Soundpieces: Da Antidote, the underground favorite he had released with his band, Lootpack. One year later, he decided to dedicate a full album to this character, so that he exposes him a bit better and gives more room to his most extreme ideas. This proved to be a success, artistically speaking; the rapper and beatmaker released a strange, atypical and intriguing rap record, as hinted with its unusual cover art. 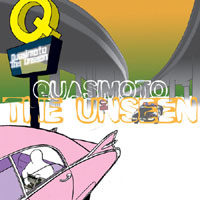 The weirdest thing with The Unseen, and the most noticeable, is the helium-infused voice of Quasimoto. As soon as with his first sentences, he underlined his uniqueness ("I'm labeled as a bad character, whatever I do") with a bitter-sweet deformed voice, delivering his words sometimes slowly, and sometimes quickly, and speaking them seamlessly on bizarre and eerie beats, influenced by unexpected sources, like the French and Czech movie La Planète Sauvage.

In his lyrics, as well as with his beats, Madlib liked to surprise: he would stop his raps with insane brass sounds on "The Curse on You", or start "Low Class Conspiracy" with blasting beats, before moving to acoustic guitars. Here, with "Boo Music", he would try himself to a Chinese-sounding melody; and there, with "Good Morning Sunshine", he would opt for some kind of dub experiments. Also, he liked to play with recent memories, when he sampled the Wu-Tang Clan, Black Moon and Gang Starr. His taste for variations would reach its height with the various movements of "Return of the Loop Digga", built each on a different sample.

The main influence of The Unseen was common by these days, in hip-hop: this was jazz music. Madlib liked this genre, as he would prove a bit later with the Yesterdays New Quintet project, and with his interpretation of some Blue Note standards on Shades of Blue, but he used it in an unusual way. The far but powerful saxophone on "Blitz" was a striking example. Quasimoto liked experiments, originality, and he did that naturally, with ease, in a light way.

Some would struggle with Quasimoto's voice. Even those, however, could be convinced by his catchiest tracks, like "Phony Gane" and its harmonica, the ethereal "Astro Travellin", and the clever "The Unseen pt. 1". After repeated listens, they would also yield to the weird "Come on Feet" and to the prodigious chorus of "MHBs", one of the most intense songs on the record. And they would ultimately understand why Madlib, all along the next decade, would be considered – or even overvalued – as one of the finest beatmakers in hip-hop's underground.