Thomas Valencia, a.k.a. Tommy V, is a known name to anyone familiar with Los Angeles' post-Project Blowed scene key players, by the end of the 90's. This rapper, indeed, had been close to the Shape Shifters, and more particularly Awol One. And in 2001, he had released an album, Quarter Life Crisis, with some artists from the Anticon label. Last but not least, along with Xololanxinxo and the Ramos brothers, he had been a member of Toca, a quartet who had managed to mix the punk, indie pop and Latin rap genres, into some messy but exciting kind of music. 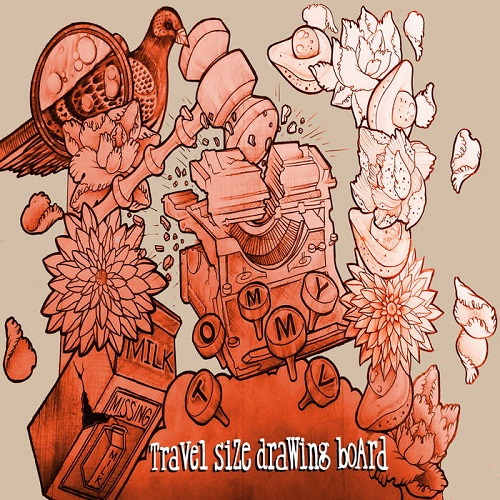 But then, as so many of his fellows, Tommy V had disappeared from our radar screen, for a certain number of years. He had come back in 2012, though, with an album distributed for free on the Internet, and released with the help – naturally – of Ceschi and David Ramos' own label. Actually, Mockingbird would become the most downloaded Fake Four record. Maybe this is what encouraged the rapper to persist, and to release an album in full standard, Travel Size Drawing Board, which looks like a testimony or a revival of Toca's catchiest crossover moments.

Starting with a self-deprecating track arguing that, no, our man is not obsolete ("Obsolete"), this album is full of contradictions: it is, indeed, both depressive and joyful. It is characterized by some happy melancholy, itself underlined by fast and melodious flows. Sometimes, it can sound a bit too emo (see the quite nice "Lament – Life - Love"), but it is saved by Tommy V's humor and playfulness.

Also, this bastardized and eclectic kind of rap definitely rocks, and it excels with everything: with rapped tracks, or instrumental ones; with whistling sounds ("Check the Fridge"), accordions ("The Search"), ska ("Broken English"), circus music ("Blind Optimism"), oriental melodies ("Run With It"), native chants ("Native Ode"), guitars ("Set No Path, Never Lose Your Way"), ethereal feminine voices ("Restless World", "Wander", "If You Need Me…"), and of course the album's main course, a posse cut rapped in Spanish ("Aguacate Con Todo"), or – another indie rap routine – an old school tribute to hip-hop culture ("Drop the Needle").

And so that this comeback is perfect, Tommy V invited California's indie rap usual suspects – or what is left of them in 2014: the Ramos brothers, expectedly; and his friend Awol One, of course, quite eloquent on "Got Clue?"; another great rapper of these days, 2Mex; and some other Shape Shifters affiliates or collaborators, like Existereo, Maleko, and Gel Roc and Regret of EX2; and also Fake Four's in-house singer, Gregory Pepper. A reunion: Travel Size Drawing Board is exactly that, because of the guests on this rock-solid album; and because it fully restores, as is, the spirit of California's indie hip-hop in its heydays.