We had almost lost sight of Sage Francis. And for a good reason: for four years, he hadn't released any record. He seemed to have stopped rapping, managing his Strange Famous label, or travelling to Africa. Moreover, his previous album, Li(f)e (2010), a collaboration with indie rockers, had not exactly been his most remarkable. So, when he came back in June 2014 with his Copper Gone album, we didn't really care. And we were wrong, since Paul Francis was back, the one we always liked, one of the most emblematic White rappers ever, in the indie scene. 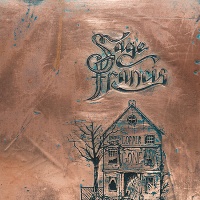 It is the Sage Francis we love; the angry, fuming and openhearted one. The rock influence, which has always been preeminent in his music, is still there, but like in the past, like with his classic album A Healthy Distrust, like always: through a few furious sounds stolen to this genre; and also, through his posture, through this rage, aimed at himself, as well as at others. Now close to 40, the man from Providence is more furious than ever, delivering some political messages (but not too much), or attacking fake underground rappers on "ID Thieves", a rant some thought was targeted at Macklemore, whom Sage Francis already criticized, in the past, for not paying tributes to the indie people like him, who influenced him.

It is the same old Sage Francis, with his very personal lyrics, his ability to lay himself bare, and his raps written as if they were a personal journal - but wait… Personal Journals, isn't this how he had titled his first album? There, he is going far into confession, talking about relationship issues ("Grace", "Once upon a Blood Moon"), or more extreme things, like his passion… for his cat, the last thing that keeps him alive, according to "Make Em Purr". With him, there is no more reserve. And it is precisely what his detractors never liked: a lack of humor, sometimes, or the absence of distance; this "emo" rap, so dangerously close to the unbearable.

Yes, Sage Francis is like that. He is ballsy, he has guts, and he sounds real. And in addition, he is everything but a weak rapper. Here again, he demonstrates his lyrical skills and proficiency. Last but not least, the beats are great, thanks to a fine selection of indie producers like Reanimator, Alias, Buck 65 and Doomtree's Cecil Otter. They are on par with the raps, either furious and inflamed, like with the single "Vonnegut Busy", "Say Uncle", "MAINT REQD", or melancholic, like with "Grace", "Dead Man's Float", "Thank You", "The Set-Up" and the nice "Make Em Purr"), or something else, like with the electronic "Cheat Codes". Overall, they are just great, making of Copper Gone a great comeback album for Sage Francis.