There is some kind of game we enjoy practicing, sometimes: identifying, among the various phases hip-hop has come across throughout its history, what could have been their equivalent in rock music. As far as the Restiform Bodies are concerned, this comparison is easy: Telephone Jim Jesus, Bomarr Monk and Passage have been the Devos of rap; or, alternatively, its Butthole Surfers. They have been part of these few Dadaists, who seemed to have fun deconstructing their favorite kind of music. They diverted it, and they mixed it with other things, giving way to experiences where pure genius often bordered with buffoonery. 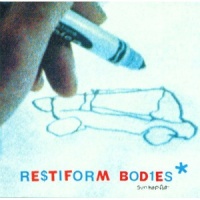 In 2001, Sun Hop Flat was one of the first records ever released by these madmen from San Francisco. It was just some obscure CD-R, recorded much before their most famous album, TV Loves You Back, which they would publish in 2008, under the Anticon label. By then, though, these three guys were already close to Sole and his folks, and they were using similar ingredients: science-fiction ambiances, like with "Cage"; weird sounds, full of cheap and threatening synthesizers; unpredictable and unstructured tracks; surrealist lyrics declaimed by the sour and fragile voices of White men, but delivered quickly and breathlessly, and sometimes interrupted by shapeless beats, or incongruous onomatopoeias, like with "Juicy".

All of this was puzzling, abstruse, bizarre, eccentric and enigmatic. It looked like a gigantic joke; it was anything but serious, especially the ramshackle finale. But it was full of exquisite ideas. The quirky drum'n'bass and the faraway chants of "Gate" were delicious. The dark and contemplative synthesizers of "Busy" were impactful. The Spaghetti Western sounds of "Giant" were delightful, as well as the rap duo on "Shrimp School", and the other parts of this multifaceted track.

The disarming thing, with these rap weirdos, was that their talent was visible occasionally only, through some great times, here and there, lost in the middle of a musical chaos. So many years after, we still don't know how to approach this record, a source of many others, since all three members of the Restiform Bodies would deliver again, all along the 2000 decade, plenty of official or amateur releases, as disconcerting but imaginative as this terrifically bizarre Sun Hop Flat.