The guys from Hidden Fortress may not be the most famous rappers on Earth. A few details, however, are providing us with some hints about the kind of hip-hop these guys from Vancouver are into: first, their 2010 album has been released by Hand'Solo Records, a label which may be one of the oldest on the indie rap scene – though not the most productive ever; and also, the featuring of some slightly more famous people, like the extravagant Japanese rapper Kaigen, the beatmaker Planit, a.k.a. The Dirty Sample, and Modulok, from the very dark Red Ants. 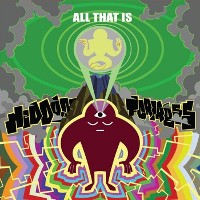 Considering their guest-list, nobody will be surprised when realizing that the second album of UsdNeedls – the producer – and nofutureface – the rapper – sounds like the science-fiction oriented records the hip-hop underground used to be fond of, about 10 years earlier. It is tough, apocalyptic, full of illuminati ranting and pseudo-religious lyrics, and not too far from the excessively somber records of the Red Ants. All That Is, actually, is made of a bunch of indus sounding beats, and weird guitar or electronic sounds. In addition to these, the MC has an intense flow style, and he is rapping as if today was doomed and it would see him die.

What was surprising is that it worked as in the first day we discovered this formula; not always, but sometimes, like with this steamroller of a track that "The Cure" is, with the very lugubrious "Rich Folks", or with the ethereal finale "Good Bye". These were three perfect tracks. Considering that the album was very short – around half an hour long – the listener never had any time to get bored, though Hidden Fortress' formula was not exactly new, and it didn't offer much variety.