Italy's famous writer Umberto Eco stated it clearly in his books: innovation and novelty are recent concepts. They are also overvalued. What people enjoy, at the end of the day, is their complete opposite: it is the recurrence, the repetition, the perpetual return to the same forms. What they like is the infinite variation of one single pattern. It is obvious with movies, where cycles, sequels and reboots are becoming the norm with blockbusters. And it is also visible with rap music, with the continuous release of mixtapes offering to the audience what it already knows, instead of new artistic manifestos. And the rapper who understood this mechanism the best, the one who used it in the most systematic way, is obviously Gucci Mane. 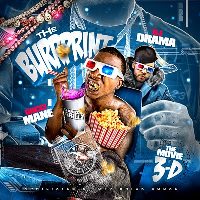 Let's take The Burrprint (the Movie 3D) as an example. Released in October 2009, it was the third installment of The Movie series, the Atlanta rapper had started one year before with DJ Drama's assistance. It was, also, the third edition of a series of six mixtapes, Gucci Mane had released in the half-year when he wasn't imprisoned. And one year later, in 2010, it would have its own sequel, The Burrrprint 2 HD. As expected, it delivered the usual recipe, the one popularized by the trap music master from Atlanta: some sexist and materialistic kind of rap, with lyrics bordering the absurd, delivered with an indolent and metronomic flow, on synthetic melodies, with a strong taste for humoristic punchlines and catchy tunes.

This new demonstration of Gucci Mane's style, though, benefited from a special reception. Never before, indeed, had he come so close to recognition, and to mainstream acceptance. The rapper, who had recently joined Warner Music, was in his crossover year. 2009, also, coincided with the launch of his 1017 Brick Squad, and some of his protégés, like Waka Flocka Flame and OJ da Juiceman, featured on The Burrprint (the Movie 3D), a mixtape many consider as one of his very best.

Ranking Gucci Mane's projects was never an easy job. And 2009 was so great a year for him, that honoring one project over the others would be adventurous. That mixtape, though, had definitely some key assets. The wacky ego-trip on "Dope Boys", the wealthy anthem "Yelp I Got Alot of That", the Shawty Redd-assisted "Foreign", and the trumpeting "Flexin", a posse cut with his Brick Squad crew, are some of them. Overall, with its first-class beats from Drumma Boy and Zaytoven, the entire mixtape was pleasant, up through the R&B quirk on "More".

On one skit there, Gucci Mane took a dig at the guy who, by then, was the uncontested emperor of hip-hop: "first question: Jay-Z is the greatest rapper alive? Survey says: that's a lie". This looked like some ordinary bragging, for the rapper. And though, he was perfectly right. At a time when the New-Yorker was at the top of his fame, Gucci Mane, with his mixtapes, invented the future. One represented an old legacy, New-York's nineties classic hip-hop, while the other laid the foundations of the next rap decade. For that reason, what's to be remembered from the year 2009 is certainly not The Blueprint 3. It is The Burrprint, definitely.