When you are based too far from hip-hop's main centers, chasing recognition and fame can become a tricky process. As a matter of fact, only a few rappers from Arizona made a name for themselves, in the small indie world. These are the Drunken Immortals, from the Universatile Music label or, for the best informed, Morse Code, a live hip-hop band. Phoenix and its surrounding, though, are also the headquarters of Avenue of the Arts (AOTA), a collective of rappers known for their collaborations with some Californian neighbors like Busdriver, 2Mex and LMNO. 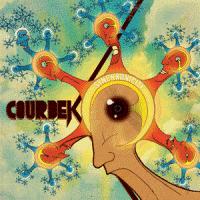 Ill Al the Anglo Saxon, Ohm, the bands The Unusuals, Central Products and Stereo Typed, and some others, have delivered some interesting records. But the remarkable Synchronicity had something more. This solo album from the rapper Courdek, produced by himself, and DJ Les and Konradio of the Unusuals, had an additional strength: it was not easily categorized. Though undoubtedly hip-hop, thanks to its scratches, its samples and its loops, it had more to offer than the classic rap formulas, with its strong musical feeling, characteristic of people who, like Courdek, used to practice "real" instruments before turning into rap.

The album, overall, was well balanced. It was rich with sounds and textures, from electronic and vocoder sounds ("Synchronicity", "Televisionary"), to less futuristic instruments like pianos, guitars, organs, flutes and brass. Fond of sung choruses ("That One", "Float", "Judge Not", "Step Two", "Walkin’ Away"), it was also full of real raps, and heavily cadenced flows ("Storytime", "Travelin’ Man"). Personal and introspective, full of biographic stories, it was nonetheless not too emo.

Open to other AOTA members, like Al the Anglo Saxon, Mykr Fiend X, Ame and Beatnik, all present on the "Everyday" posse cut, it was however, primarily, a personal work. Despite his sermons against television, or in favor of an independent life, Courdek was never too preachy. Synchronicity was long, unassuming, not too catchy, without any banger, but it was close to flawless; it was one of the most constant and satisfying record ever proposed by the Arizona rap scene; and a good entry point to Avenue of the Arts and the Phoenix scene.