Quite often, if one wants to discover a band's very best, he or she has to go back to the origins, to the time when, still young, its members were delivering anything they had in mind, without calculation, limitation or self-parody, and without the pain of renewing and reinventing themselves. This may also be the best approach, to discover Imaginations Treetrunk, a loose indie rap collective from Vancouver. 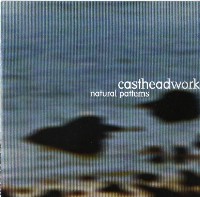 These folks had talents, especially their beatmaker, Aalo Guha. But most of their albums had been disappointing and frustrating. They were too long, and some of the rappers were obviously not top-class MCs. In order to find the very best of them, actually, one needed to go back to the beginnings, and to this record, Natural Patterns. Now very hard to find, it had been released in 2003 by a trio named CastHeadWork, consisting of the great Aalo Guha, the rapper Azrael, and another MC, Cle, who completely disappeared from the radar screen since then.

The title, the cover art, and the name of some tracks ("Acoustic Ecologie", "Stare at the Sun", "Age") gave the illusion that this was a relaxation or new age record… And actually, it was not too far from that: Natural Patterns, indeed, was Aalo Guha and his crew's depressive album. It was a contemplative work piece, introduced with an ambient track, and made almost exclusively of slow and ethereal beats, sequenced in a seamless way, sometimes without any transition, like with "Keep on Staring" and "Still Standing", two tracks sharing the same music. And if some rappers were there, if they could even deliver some good old ego-trips, they also knew when to stop rapping, and give way to Aalo Guha's soundscapes.

And astonishingly, it was just great, thanks to the quiet piano and female rapper, MC Shay, on "Not Your Typical", to the long and jazzy finale "Keep on Staring", to the oriental melody of "Ages", displayed in two versions, or to the subtle mix of raps, piano, cello and airy saxophone of "Hassles Stressin'". The album's summit, however, was unmistakably the concise, dirty and imperturbable loop on "Deeper". This track was the ultimate proof and the best demonstration of Aalo Guha's skills, when unspoiled by the typically messy albums from Imaginations Treetrunk.