Buck 65, a.k.a. Stinkin' Rich, a.k.a. DJ Critical, has been at the very center of the Halifax rap scene since the early 90's. With Witchdoc Jorun, he managed to unite the rappers of the capital city of Nova Scotia. With his radio program on CKDU, he helped fashioning his city's approach to hip-hop. With some iconoclastic references, he helped it building its own rap identity, until, with the help of the Anticon label and the single "The Centaur", he extended his fame and network beyond Canada, and became a central character on the international indie scene. 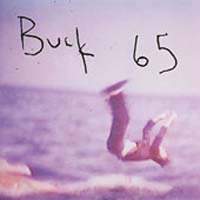 Vertex (1997-99) had been his breakthrough record, but his first album for Anticon would be the next, Man Overboard, in 2001 – it would also be his only one for them, apart from the Bike for Three project. As such, in the heyday of the Anticon era, it had been quite expected by the indie community. And it wouldn't disappoint: for a large part, it had the same strengths as the previous record.

On heavy and un-funky beats, and tracks split into movements, full of playful collages and long scratches, Buck 65 would speak with a sweet – but sometimes derisive – voice. He would talk, more than he would rap, sharing his thoughts, often with humor and irony. Also, he would persist with atypical samples, using for example an acoustic guitar from Metallica – which would disappear from Warner's rerelease – a strange but catchy medieval melody, or some drum'n'bass.

It was a different record, though. The experimentalism was less extreme than on the previous one. It was wiser, and more lugubrious than Vertex – already not the most joyful record ever. As a matter of fact, this new album was full of pathos and emotions. As the title said, Buck 65 had fallen overboard; he was on the verge of depression. Man Overboard, indeed, was dedicated to the rapper's mother, who had just passed away, due to a cancer. This very painful event impacted some of his songs. It was explicitly the subject matter of the ninth track – an untitled one, as all others on the record, which would stay nameless until Warner's rerelease.

Man Overboard, in fact, was moving away from hip-hop; no battle style, no ego-trip, no braggadocio here. Ten years before this would be common with mainstream rappers, Buck 65 was introspective, and showed vulnerability, confessing that he was shy with ladies, joking about the poor content of his wallet, or chasing a love he didn't believe in. The rap purists, actually – the most open-minded, I mean – would prefer Vertex to this record. Nonetheless, Man Overboard was a glimpse of Buck 65's future, the first step toward the rap and folk/rock crossover he would be famous for, when becoming a major label artist.