One can find anything, into the Restiform Bodies' prolific discography, be it official or less official releases, collective or solo works. However, from one record to another, it is not that easy to really notice differences: each time, it is always the same kind of patchwork and postmodern hip-hop, with a few rock and electronica influences, and a bit of weirdness. It always sounds very amateur. It is always some kind of fantasy and exuberant rap, concatenating brilliant and not so brilliant ideas. And it never really looks like a finished product. Which Restiform Bodies album is captivating? All of them. Which of them is a masterpiece? None. 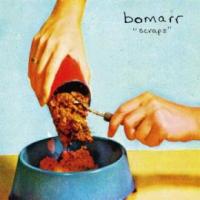 Bomarr Monk's Scraps, however, is not too far from being this. This record, actually, was just a tour CD, available for free on the Internet. It was a collection of unreleased tracks, including collaborations with other underground hip-hop figures like Sole, Ellay Khule, Circus, and his colleague Passage, plus a few songs from Of Montreal and Alan Astor remixed by Bomarr or, on the opposite, some Restiform Bodies tracks reworked by the likes of Cars & Trains and Superargo.

As always, it was messy, shambolic, and nonsensical – but good; outstandingly good; be it exciting ("Trike"), twirling (the remix of "Happy Slapping") or amospheric (the less convicing remix of "Chapel of the Chimes") instrumentals, the electronic beat on "Battle / Riflediss", fitting so well with Ellay Khule's speedy delivery, the crescendo and dark ambiances of "Mossman", so aligned with Circus' hallucinated logorrhea, the wild, playful and frenzied remix subliming Sole's flow or, even better, the very nice version of Alan Astor's "Fantastic Fantasy".

Some dispensable remixes (Of Montreal's "My British Tour Diary"), vacuous instrumentals ("The Return of Mental Illness") and inconsistent fantasies ("Sneakmove iPhone Ringtone Song") also found their ways one this record. They were parts of its charm, however. And the alchemy with Passage was still close to perfection, as demonstrated with the songs "Atur" and "This Perfect Day".

Scraps, though, is quite far from being a masterpiece. The Restiform Bodies have been unable to record any. Or more exactly, yes, they would have been able to do it, but they just didn't care. They preferred compiling ideas, tens of ideas, and share them without any filter, without any limitation, recording anything crossing their minds. Scraps is definitely not an indie classic; it is even not a must-have. But it may be the closest to it, among the plethoric production of these guys.