By 2009, Nigalooh Damon, a.k.a. Zest the Smoker, was not the most famous rapper in California. But he was not a newcomer. As soon as in the mid 90's, he had collaborated with Peanut Butter Wolf, contributing to his Step on our Egos? EP, and then to "Interruptions", a prodigious song distributed in 1997 with Strength, a magazine, and later available on PBW's My Vinyl Weighs a Ton. A bit later, in 2002, he would record Death at… 27. Due to personal and financial troubles, however, and after some other projects leading to nowhere, we had to wait 7 more years - and Dave Dub's critical help in finding a distribution contract with Legendary Entertainment - for this record to be finally released. 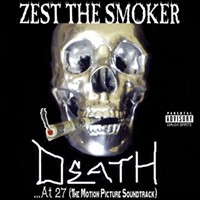 According to Zest himself, RZA considered enlisting him with Gravediggaz, after he had listened to the album's demo. This will be difficult to check, but it sounds credible, judging by the mortuary mood of Death at… 27. It is indeed not too far from the register of choice of the horrorcore heralds, minus the parodic side.

First, we have the title. Then, the chromed skull on the cover art. And finally the outrageously dark content of the record. Death at… 27, indeed, was made of tough and dissonant beats. It was full of noises and interferences ("My Ol' Nasty Habit"), deep basses, threatening scratches ("Murder Psycho"). And the production was extraordinarily austere, like with "Death (Purgatory"), a song which started as a pure instrumental, but finally ended with some raps, and then one single sound, both sporadic and heavy. Last but not least, we had the rapper's voice…

Sometimes, Zest's flow was quiet and slow. He enunciated every word carefully, insisting on the last syllable of each verse, using a deep voice. Or, on the opposite, his rap was quick and frantic ("The Smoker's Alive", "Murder Psycho (Max Murder III)"). He could play with either style, but each time, the output was the same: it was impressive, oppressing, and showed great skills in terms of breath control.

An anthological track like "Micalina" was, in itself, worth the 7 years wait. Despite the cadaveric coldness of his formula, we were glad that Zest the Smoker rose from the dead in 2009, finally disclosing this great lost classic of the indie rap era.