Noah23 is one of these underground semi-stars, who never really made it, but were some kind of key references in the indie rap scene by the early 2000's. Now that this kind of hip-hop is a faint memory - and just like many of its key players - the rapper from Guelph, Ontario, found an asylum at the Ramos brothers' Fake Four. Thanks to them, he released Fry Cook on Venus in 2011. And the least that we can say, listening to this album, is that his change of label is perceptible. 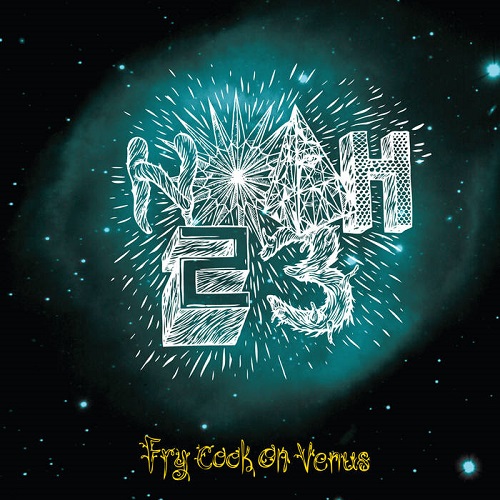 Ten years ago, Noah23's hip-hop was weird, unfocused, puzzling and psychedelic. But now that these characteristics are becoming more common in rap, he's changed his way. Oh, to be honest, his style still goes in too many directions. As in the past, this record is full of complicated lyrics and playful rap games, like with Halifax's Ghettosocks, on "Old Dog". Also, the presence of other indie rap half-celebrities like Sole, Awol One (together in the great and organ-full "Murder City") and Myka 9, will remind where he comes from. With "Bright Green Laces", "Fry Cook on Venus" and "Can’t Stay Mad", though, Noah23 is exploring more adult topics, and more usual ones, like relationship issues, or his love for ladies. He even gets sentimental on tracks like "Intangible Heart Crescendo" and "Nuts".

The Fake Four flavor of the record also comes from the beats; created by some in-house producers like Factor, Cars & Trains and Skyrider, they are all full of guitars samples, sounding like indie rock. By the way, some artists from this genre are also supporting Noah23, like Liz Powell of Land of Talk, and Gregory Pepper. And even he, is singing, from time to time, though he is still capable of rapping fast, as with Sea of the Infinite Wave", with Myka 9 and Ceschi. Talking about Ceschi, this record really sounds like one of his, like The One Man Band Broke Up for example.

As compared with the previous ones, this album is more pop, more melodic, and more accessible. It could conquer a bigger audience. It is also less tasty, at times, like with the rather mediocre "No Tomorrow". Fry Cook on Venus is all that. But please don't trust those who will complain about it. In many ways, Fry Cook on Venus is also a progress, or at least a great complement to albums like Quicksand or Jupiter Sajitarius, released in the heyday of Noah23's underground fame.