Usually, this kind of rap is boring. Nothing duller, indeed, than a collection of conscious rappers, declaiming some political sermons on sluggish beats. In Miami, though, with the Botanica del Jibaro collective, this formula worked, maybe because its members, all close to the active local electronica scene, didn't invest all in their lyrics: they also made some great music; they were real composers. 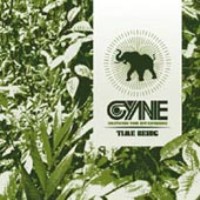 Most singles released by Counterflow Recordings and the Beta Bodega Coalition were great. But quite often, the albums were disappointing. With its short 32 minutes, though, Time Being is an exception. This record from Cyne, their first and only one for Botanica del Jibaro, is one of the best ever released by this crew, represented there by four guys: Cise Star (Clyde Graham) and Akin (Akin Yai), the rapopers, and Speck (Michael Gersten) and Enoch (David Newell), the beatmakers.

When people decide to call their band "Cultivating Your Own Experience", it is obvious that they want to position themselves as wise men, and that they are opting for conscious rap. Cyne, indeed, is all about gravity, contrition, and leftist platitudes. But the beats, all organic, warm and neat, are making the difference.

"Papermate", is talking about divine inspiration, but what is brilliant there is the Asian-sounding sample. "Steady" is visiting once again the Civil Rights era, but the most subtle part of it is the feminine song. The Black question is asked on "Samura's Optic", but what really matters are the "real" instruments and the vinyl sounds, with provide this track with some additional depth. The story is the same with the excellent "First Person", arguably the album's best moment; or its most melodic, at least, thanks to its sunny guitar and strange medieval-sounding song.

Boredom is showing its ugly face on some skits only, and with the flavorless loop on "Self Exam" - which means almost never. As a matter of fact, even if the next album, Evolution Fight (2005), would also show some strengths, Time Being is still, today, the best entry point to Counterflow and Botanica del Jibaro.