In 2003, the casting had changed for the dream team made of Daddy Kev and D-Styles. After some fruitful collaborations with Awol One, the Los Angeles beatmaker and the DJ from the Invisibl Skratch Piklz had finally exchanged the hoarse voiced Shape Shifters MC, with another key rapper from California: The Grouch, from the Living Legends. Together, as the latter would announce it on frantic violins, they would make their best to bring something new to hip-hop. 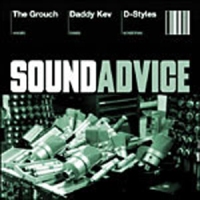 And they fulfilled that promise. On Sound Advice, they were all letting themselves go. Usually too linear a rapper, The Grouch adopted there a more fantasist and malleable flow. As with the now disbanded Invisibl Skratch Piklz, the turntablist D-Styles stayed loyal to his crazy kind of deejaying, even if he was a bit too discreet on this record. As for Daddy Kev, the producer, who was delivering most of the work, he seemed to have lost absolutely all inhibition since the Slanguage album.

The spirit and boldness of free jazz, which had been the basis of the latter, were back on Sound Advice: crazy saxophones made it again, as well as delirious pianos, bouncing contrabasses, and mad hi-hats. Nobody knew exactly where each track began or ended, but it didn't matter. The MC was making his best, out of this disorder. His raps were marked by a total freedom, including some slogans here and there, like "live the way you want to" or "freedom of expression is beautiful".

After Slanguage, some had been a bit dubious. But now, there wasn't any more room for doubt. Very short – 21 minutes only – Sound Advice had pruned anything superfluous. Denser, this record was also more accessible, it was much catchier. From "Square One" through the piano on "Climax Cleverly", including the very rhythmic "Usually" or the melancholic "Visibly Vocal", Sound Advice was full of delights. So much that this record, though the less representative of The Grouch's rich discography – more than 15 solo albums, is maybe his absolutely best.