With hindsight, we know now that there was one single criterion, to assess the quality of a Living Legends record: the level of involvement of Eligh. The Californian collective's best albums, indeed, were those where he took the most active part. It was true for his solo albums, as well as Luckyiam.PSC's great Justify the Mean$ (2002). And it was true, also, for the first and last album ever released by the 3 Melancholy Gypsys, one of the two funding trios of the Legends. 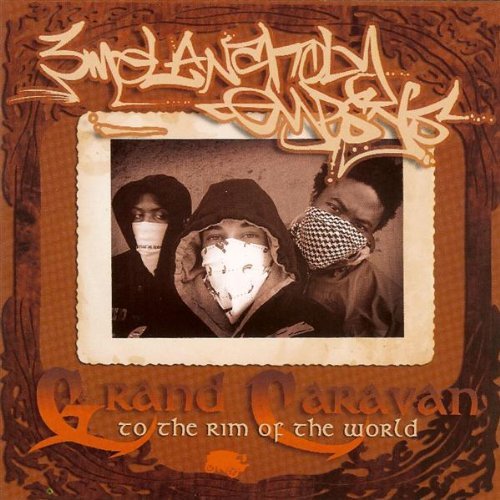 Please don't rely on the cover art, which looks like a 90's French rap demo: this long-awaited record from Eligh, Murs and Scarub was no less than excellent. Not excellent according to rap standards: just excellent. Using the gypsy subject matter – the band name, the record title, Jose Feliciano's "Gypsy" in the intro, some oriental sounds to suggest the caravan… - as a framework, all three rappers delivered successively some astrological or mystical rants, more emotive and sensitive stories, or lessons of wisdom, as with the memorable "Chant", about the best remedy to life's downsides. And all of this was declaimed with a rare energy.

And the beats were as good as the raps. Alternating smooth compositions with bouncing synthesizers, as usually with Eligh, they were full of smart tricks, like with the slowed hooked of "Young Man", or the robotic flow of "The Plannit". The album also had some boring songs ("3 Rings", "Countdown", "Nautilus"), but all were forgotten when came a fantastic final series of 4 or 5 brilliant tracks, like "Beautiful Mind" (beautiful indeed), a devastating "Armageddon", and finally the nice "Child 2 Man", where all three rappers were giving way to Mystic's quiet voice.

In 2002, in an interview for the French webzine Hip Hop Section, Murs had shared the following info: "the new 3MGs album (…), will hopefully be out for fall or August, it’s called Grand Caravan To The Rim of the World and that will be the best album I ever did…". This was not a lie. Murs was, indeed, perfectly right, except for one thing: it finally took 3 more years for the record to be available. And maybe it is because of this long gestation, that the album is so good. Thanks to three of its most eminent members, the Living Legends, a group too much used to releasing frustrating albums, had created one of the most notable of the indie era.