In 2005, the Chicharones had already some releases behind them. As soon as in 2003, they had recorded together a Boss Hog EP. It was mostly in concerts, though, that the complicity between Sleep – a member of the Oldominion – and Josh Martinez – from Halifax's hip-hop scene – had been forged and developed. This was obvious, when listening to the energetic, joyful and catchy When Pigs Fly. 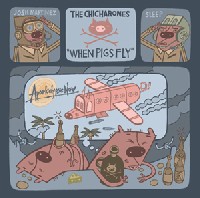 Both pals knew the ropes, when collaborating on a rap song. They could not play with their voices' complementarities – these were too much alike – but they took all benefits from their smart and playful interactions, like with "Surf Rock", a series of associations of ideas, delivered at full speed. From the western-like beginning of the record, through its Hawaiian conclusion, the self-proclaimed "Simon & Garfunkel of rap" would talk about anything, like playground braggarts "Bully Bully", or themselves, in a humorous way, on "Pork Rind Discotheque". They could also start some confession, on "Breaking Point". And each time, it was delightful.

Excepted with the Latino-sounding "Fiesta" and some other fooleries, the music was surprisingly quiet, compared with the fast flows of both guys. Concocted mostly by Zebulan Dak, and by some indie favorites like Moves, Maker, Snafu, Samix and some others, the beats were melodious, cheerful, and sometimes elatedly retro with its Beach Boys-like hooks ("Little Little", "Guys Like Me").

To be honest, the sounds were not always on par with the Chichis colorful raps; but when they were, oh G, what a delight! Such was the case with the bouncing piano on "Little Little", the nice "Can't Find the Time", or the guitar on the magnificent and half-sung "Breaking Point". "Guys Like Me" was another great song, thanks to its violins and some scratches from Skratch Bastid; this was indeed so good that it had been already used on Pork Rind Disco, an EP released just before the album, and that it would be recycled again on Sleep's solo album Christopher.

In Europe, When Pigs Fly had been distributed through Bella Union, Robin Guthrie and Simon Raymonde's label. This was a bit unexpected and surprising, the light-hearted hip-hop of the Chicharones being very far from the contemplative sounds these guys' previous band, the Cocteau Twins, had been famous for. Together, however, the Canadian and the American rappers made music sexy enough to appeal to people completely external to the hip-hop circles and tradition.