At first glance, the Cankles were so diverse that they looked like some mutant hip-hop group from the UK. But actually, they were coming from America; from Chicago, to be precise, a city where the rap underground scene is rich, and where it proliferates with people like All Natural, the Molemen, or the Galapagos4 posse, though with a less risky formula. It is thanks to the latter, however, that this six or seven-member group with rather unclear boundaries came to our attention. 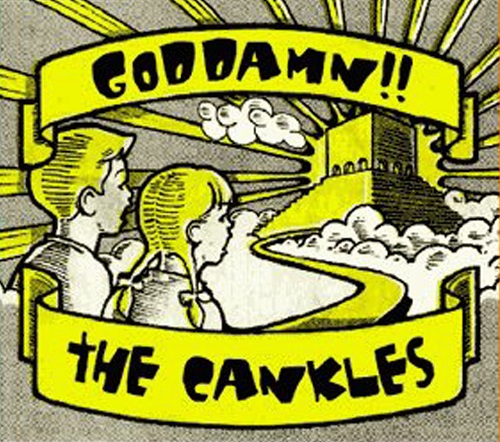 Kid Static rapped and played synthesizer. He was the only Black man in the group, and the only one we would hear about again, later on. Ricky Ropesack sang, produced, and he was in charge of drums. The DJs Intel and Once a Month - what a blaze! – scratched. PMO played guitar. Jello as well, and he sang in addition. As for Jam One, he was into beatboxing. With such a crew, not surprise if the key words for this group's sort of hip-hop were eclecticism, fantasy, and crossover.

Just to get an idea of the recipe, drop an ear to the sound festival of "Cankle Main Theme". It was not by chance if the group decided to name this track this way, since it sounded as its manifesto, its signature, displaying in a very dense way everything these guys were capable of: an unperturbed electronic gimmick, a scratch downpour, a furious guitar and some beatboxing, all built in a crescendo.

Goddamn!! had a few raps, like with "Closed Eyes", the funny "Mr. Sinister" and the catchy cocktail of organ, funk guitar, and electronica on the live-sounding "Magic Sesh". But there was also some down-tempo tracks, like "Hibernation", "Brandy Snifter", "Delirium Tremens", or the quiet guitar and whispering woman voice of "Bunny Killer". Last but not least, there was some "Sex Machine"-like funk on "Leftover", plus a bit of organ and, once again, some scratches.

Diversity is not a synonym for quality. And actually, it was indeed too much, at times, for so short an album. However, even if these Chicagoans' bastard kind of hip-hop was not necessarily consistent, even if their live songs did not excel in all domains, this one and only album of the Cankles had been a good surprise and a bowl of fresh air, for the happy few who had discovered them back in the days.