The juxtaposition of the words "haiku" and "coup d'état" is sounding strange; especially if, like us, you are a French person. It is, however, an appropriate translation of what this unusual album is made of. This record, indeed, mixed the concision of the most evocative poetic form in Japan, with some kind of revolution in hip-hop. Nobody should be surprised, knowing who is behind the Haiku d'Etat trio: Mikah 9, a member of the Freestyle Fellowship, Abstract Rude, a founder of the Project Blowed open mic, and a third guy, Aceyalone, who is both of these. Meaning, three rappers quite used to pushing further the boundaries of hip-hop. 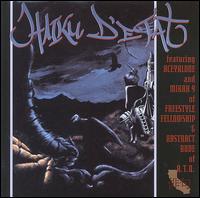 Such said the only real haiku on the record. A conclusion to the album, it stated clearly how much these three exceptional MCs would crush all competitors. The key person in Haiku d'Etat, though, was not a rapper. This was, instead, Adrian Burley, an ex-drummer in the alternative rock band Third Eye Blind. He had initiated this project and gathered a full collection of other musicians, coming like himself from the Bay Area. Jointly with him, David Boyce (saxophone), Emerson Cardenas (bass) and Michael Cavaseno (guitar) supported our three rappers.

No machine, then, on this record. The sound was 100% organic, providing the rappers with more room to demonstrate the virtuosity of their acrobatic flows. Thanks to the music, the trio would go through multiple transformations, testing several genres, from the melodic songs of the beginning ("Haïku d'Etat", "Non Compos Mentis"), to the experimentalism of the end - this "that's tight, I like that", repeated continuously by Aceyalone, with a minimalist bass and someone coughing in the background - including a few escapades on reggae territories.

An African song ("Studio Street Stage"), a ganja-heavy dub ("Los Dangerous"), over-cool raps ("S.O.S.", "Firecracker", "Other MC's"), declamations on a retro organ ("Still Rappin"), avant-garde weirdness mixed with a famous oriental melody ("West Side Slip n' Slide"), and a return to Jamaica with a Bob Marley cover ("Kaya"). These were the journeys on the long trip Haïku d'Etat was; an exotic trip, both appeasing and exhausting, but well organized. Such was the album, one of the essentials, in the Freestyle Fellowship and Project Blowed lineage.