A rap concept-album, maybe the most extreme ever released in this musical genre; but not only. A record full of rap poetry, also, where music was secondary, accessory, and functional, without this being an issue. Some hip-hop transformed into true literature – yes, this old fantasy, this promise no-one was ever able to commit to. But for good; for real. Such was A Book of Human Language. 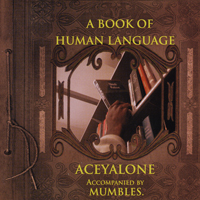 "A", "Book", "Human", "Language": each word was important, in the title of Acey's second solo album, one the most conceptual ever released in rap music.

"A", not "the"; Aceyalone, indeed, was not prophesizing. He didn't deliver any dogma, or any gospel. He was just trying to share his view, to raise his own voice.

"Book", since this very literary record was structured according to several chapters, placed between a foreword and an afterword ("Forward","Afterward"), supplied with a table of contents ("Contents"), linked through astute transitions, and with track titles all starting by "the", each dedicated to a unique topic.

"Human", because the most eminent member of the Freestyle Fellowship was talking about Man with a capital "M", when he reviewed serious subject matters like life ("The March"), death ("The Thief In the Night "), the troubles of existence ("The Hurt"), time ("The Grandfather Clock"), misleading appearances ("The Faces"), the alliance of the opposites ("The Balance"), or when he opted for some kind of conscious rap, which was not just about sermonizing and pontificating.

"Language", since everything there, was declaimed by one of the most habile MCs ever engendered by rap music. His plastic flow and smooth voice were completely dedicated to a neither awkward nor grandiloquent form of rap poetry, a poetry full of vocabulary, metaphors, verbal acrobatics, and surrealistic puns ("white like snow or black like coal, yellow like the moon and read like a book"). We even had an allusion to Lewis Caroll ("The Jabberwocky"). And though, despite Aceyalone's many flirts with literature, he staid loyal to the rap tradition, for example when he delivered some regenerated sort of ego-trip, on the striking "The Guidelines".

There is something frustrating with A Book of Human Language, however; a strong reason to find this album less strong than Acey's other classic, All Balls don’t Bounce. The difference is significant, since it lies in the music, in the beats. So that the album really sticks to its concept, so that it fully looks like a book, and not just like a compilation of lyrics, it was produced by one single man, Mumbles, a beatmaker sometimes considered a bit tedious, due to his gloomy jazzy sounds.

But could have this been handled differently? Was Mumbles really allowed to outshine the rapper? Wasn't his raison d'être, actually, to offer ambiances to Aceyalone, instead of bangers, as with the dark "The Walls & Windows"? Wasn't it to provide him with some metronomic complements, instead of flooding Aceyalone's rap into too much music, and pushing him into the background?

Actually, considering Mumbles' work as accessory was dishonest; it was not legitimate. As a matter of fact, the beats on A Book of Human Language were sometimes outstandingly bold, close to the heterodox and iconoclast experiments that, by this time, were popular in the indie rap scene; a scene Acey was a godfather for. How would you characterize the hallucinate "The Hold", "The March" and "The Faces", for example? Wouldn't you admit that "The Guidelines", with its salsa feeling, was reaching new heights, in terms of delicacy and gracefulness?

Also, despite his wordiness and volubility, Aceyalone knew when to let his music breath. He was able to offer some purely instrumental moments to Mumbles, in the same way as he could start an a cappella. Instead of burying his beats into some logorrhea, this rapper knew how to make a balanced record.

It was not negligible; it was, actually, absolutely capital; as without the music, without this flow which, in itself, was nothing else than music, poetry would be boring. And boring, quite clearly, is a word which doesn't fit to this record.