On "Julia Set", a track on Quicksand (2002), Noah23 had promised that his next album would come with a complimentary dictionary. It could have been a good idea. The characteristic of the rapper from Gelph, indeed, is to build his raps with plenty of unusual and weird words, coming from the worlds of technology, medicine, or science-fiction. In addition to this, he delivers them at full speed, mixing them with incongruous beats coming from folk music, or drum'n'bass, or whatever else he has in mind. Needless to say, since his first album, Neophyte Phenotype (2001), many have been quite dubious when listening to his music. 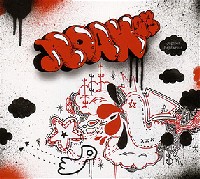 Released after two years of recording, on Germany's 2.nd re – and no longer on his own Plague Language label – Noah23's next album had, in fact, no dictionary. It wasn't really needed, however. Jupiter Sajitarius, actually, proved to be much more homogeneous and accessible then Quicksand, an album generally considered as the best, in the Americano-Canadian's discography. Produced one last time by The Orphan – before he starts launching the Blue Sky Black Death project – its music was somehow quieter than in the past. No jungle this time, but on the opposite, some boom bap and funky beats, with a few cuts from DJ Marmalade. And this homogeneity and this soberness – though relative, we would still hear a reggae hook ("Scream") or a banjo ("Camera Shy") on this album – were subliming Noah23's raps. They provided them with more room, like they never did.

The lyrics, as usual full with words you would even not find into your biggest encyclopedia, were as usual close to undecipherable. But they sounded good, thank to the multiform flow of the MC, and his ability to move to sing-song (on "As below So Above" and beyond) to double time rap ("Chicken Pox"). From the bombastic introduction of "Lizard Lion Eagle", through the melancholic piano of the splendid "Petit Mort" – a finale produced by Varick Pyr, a collaborator of Sage Francis – and including the jazzy guitar of "Photo Soul Decay", the smooth "As Below So Above", the funky "Godhead Omlet", the sumptuous "Nova Planet" and the featuring of Ceschi Ramos ("Scream"), Modulok (the apocalyptic "Dead Owl Funk") and Livestock ("Zapata Physicians"), all this was Noah23, at his very best.