Since 2007 and his last album, Tinfoil on the Windows, we all thought that soso had disappeared with his label, Clothes Horse. Sure, in 2009, he had released a joint album with DJ Kutdown, All They Found was Water at the Bottom of the Sea. But this was an instrumental record, available only through a very specialized Japanese label, Hue Records. In 2013, however, soso was still alive. As other key artists of the indie rap movement, he had found an asylum in one of the few labels making their best to keep this scene alive, Scott Da Ros's Endemik Music. 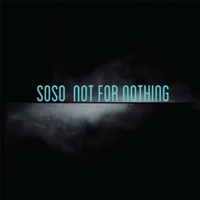 Not For Nothing was also released by Kütu Folk, a label located in Clermont-Ferrand, France. For that reason, it is available in our country. The rapper even made his way to the prestigious Transmusicales de Rennes festival, collecting for the first time, maybe, some critics in the local paper press. Those critics were a bit circumspect at times, it must be said, the reviewers not being necessarily familiar with the context, or well equipped to really understand this album. No-one should be surprised about that: soso's rap, we know it, has never been made for all. You have to like this kind of spoken word, full with contemplation, sadness, honesty, and with a pathos bordering the unbearable. Savoring these cold and skeletal beats accompanying soso's intimate thoughts is not a given neither.

Soso's music would push you to suicide, and this album is no exception. It is starting hard, with the deep existential anxiety of "Things Started out So Pretty". And it continues with stories about a lost love, or an impossible one, or both ("Pretty as a Picture"), with a boring birthday party in a too ordinary life ("The Rain Barrel"), and then with thoughts about abandon and resignation ("If I ever Knew You, I don't Know You Now"). Here we stand with the first half.

And it is not improving with the second part. It is even more obtuse, starting with ideas of suicide, or murder ("Choke"), the story of a child killing raccoons ("The Extermination of a Raccoon"), talks about the impossible communication between human beings ("The Blushing Bride"), and soso hoping, without believing it, that a dead love has not been fully vain ("Not For Nothing"). Phew!

Long story made short, love does not exist, life does not deserve to be lived, and all is grey. Even the non-English speakers will get the idea, when hearing the Canadian's slow rhymes, sounding more like a depressive poet than a boastful rapper. Same thing when they will hear him singing. Yes, singing. At times, soso is trying this, in a very fragile way on "The Blushing Bride", with a despaired and deformed voice on "Not for Nothing". All will also understand the tragic of the situation with the music, produced by an old friend of soso, Maki.

As far as the beats are concerned, this is soso at his blackest. This record is full of austere soundscapes, evoking the iced and depressive deepness of the Canadian prairies, where the rapper lives. The rhythm is slow and heavy, and the music is limited to a few dried instruments, pianos and guitars mostly, in a style similar to Talk Talk's last two albums. Talking about these, the closing song on the beautiful "Pretty as a Picture" reminisces a lot about Mark Hollis. Also, in order to accentuate this feeling of pain, soso regularly steps aside, and he let the music alone. He hushes, giving way to a mortuary atmosphere.

This dark music emphasizes each track on the album. Also, it looks like a step back to the melancholic soberness Tinfoil on the Windows lacked, due to its too many guitars. It allows Not For Nothing, this late and unexpected work from soso, to approach the quality of Birthday Songs and Tenth Street & Clarence, the masterpieces this very unusual Canadian rapper delivered in the previous decade.