For a long time, we at Fake For Real had kept an eye on the American state of Maine and its indie rap scene, but with some lack of conviction. We strongly believed that, when they had relocated from the East Coast to California, the founders of Anticon had robbed this scene's sacred fire, and that the less inspired cousins they had abandoned there were left with bits and pieces only. 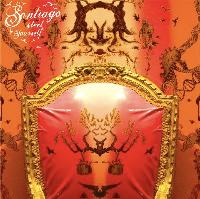 And indeed, the records released by Milled Pavement, the key label there, have always been interesting, personal, full of good will and with some good ideas, but they were always missing something. They lacked consistency; they were not as fine-tuned as one could expect. That was true, until Sontiago, who had recorded earlier the appreciable Abuse My Adoration – also the spouse of JD Walker, Sole's previous partner in crime within the Live Poets – had released on Endemik Music one of the best album ever proposed by this Canadian label.

Things got more serious with this record: now part of a more visible label, supported by first-choice beatmakers like Maker, Alias and Xczircles, and praised by URB Magazine as one of the 100 rap artists to watch in 2007, Sonya Tomlinson (her real name) had better odds on her side. And indeed, as a matter of fact, she made things work. By this time, this emancipated kind of rap flirting heavily with indie rock - and at times with jazz ("Hollow"), some eastern sounds ("Hold on Me") or Melody Nelson-like strings ("I Spy Fake") - was no longer a novelty; same with Sontiago's introspective lady posture and lyrics. But thanks to her voice, her tone and her style, including her ability to move from sing-song to straight raps, it sounded personal enough to make a strong impression.

And each track, on this album, was getting stronger than the previous one. It was true with the raps – let's notice for example a great Bleubird featuring on "Crush the Rainbow", or the duo with dilly dilly on "Hide’n Seek" - as well as with the beats. The second half Steel Yourself was, indeed, more impactful than the first, thanks, mostly, to two tracks: "Force It", with its life lessons ("you can't change who you are born to be, when there's a will, there's a way, you can't force it" ), a great hook and the lyrical voice of Amie Laway; and the sumptuous "Old Orleans", based on lyrics from Curtis Mayfield, about some guy trying to salvage things after the Katrina hurricane disaster, in New-Orleans.

Both tracks were above average, as well as the album, overall a good sample of this wise, introspective, crossover and White guys kind of hip-hop, indie rap had become synonym with by 2007, with Maine one of its big strongholds.