By the beginning of the 2000's, Disflex6, a veteran hip-hop band from the Bay Area underground, was supposed to be granted with a second life, thanks to England's Lex Records. By the same time as they were working on their first album for this label, Robot Dreams (an album others would finally release…), however, the group's members were pursuing their own careers. Elon.is, for example, one of the sextet's producers, proposed by the end of 2002 his third solo opus. 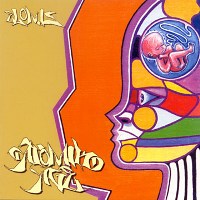 Well, solo… not exactly, as the beatmaker had invited his comrades from the Disflex6 and Sunset Leagues collective, including its leaders, Lazerus Jackson and Jason the Argonaut, as well as some other friends from the West Coast Underground, like Luckyiam.PSC (Living Legends), Halekost (Executive Lounge) and Z-Man (99th Dimension). And finally, there was nothing surprising if Atomik Age sounded like a Disflex6 regular album, with its rather classic kind of rap, its subtle and small beat variations, its few scratches and its dark and concise songs.

Restrained and repetitive, this kind of music depended a lot on the MCs, on their words, their tones, and the speed of their flow. In such conditions, Atomik Age was sometimes a bit too boring, especially when it used too much old and cliché hip-hop routines ("Laymen", with Luckyiam), with slogans like "all the b-girls rap that shit" ("Rock that") or their banal celebration of friendship ("Old Friends"). However, as Elon.is' friends were far from being lyrically awkward, and since he had himself an ear for many genres like jazz, electronica, or any music coming from the 70's, his songs, even the most sober, made sometimes a strong impact.

A handful of tracks were remarkable: instrumentals like "Risky", and "Collecting Thoughts" Part II" with its sitar; or, rapped songs like "Minutes Tick/Time Piece" with Halekost and Disflex6's leaders, "Halloween" with Mercury, "Outlet" with Lazerus Jackson and Mercury, again (a.k.a. the PBS duo), and the fabulous "Hate Maker", with DragnaslimDublin's indolent and Lyrics Born-like flow. These tracks were somehow too much concentrated into the album's first half, but thanks to them, Atomik Age proved to be much more than just an appetizer.