The records from the Solesides – now Quannum – stable can be split into two categories: some of them are solid and consistent albums, now true classics (Nia, Endtroducing...); and some others are more heterogeneous, consolidating very diverse tracks, sometimes from different periods (The Album, Spectrum). Without any doubt, Solesides Greatest Bumps belongs to the second category. In order to celebrate their joining Ninja Tune, all five hip-hop artists proposed this compilation, full of unheard tracks, rarities or singles released at the heroic time of their own label, some of them even before electronica fans decided abusively that DJ Shadow would belong to their musical genre of choice. 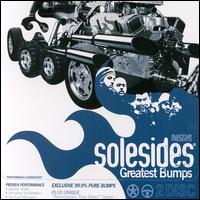 As a result, one can find anything on both CDs of Greatest Bumps: some songs from Lateef, Lyrics Born and The Gift of Gab, for example, from the times when they were still solo artists; some others from the duos they would create a bit later, Latyrx and Blackalicious; the first instrumental experiments of DJ Shadow ("Entropy"), premises of the future "abstract hip-hop" subgenre; many singles, including the classic and astonishing "The Quickening", from Lateef the Truth Speaker, produced by Shadow, and also present on Latyrx's The Album; "Lyric Fathom", the first Blackalicious track; an extract from Melodica, the legendary first EP of the duo; and the excellent and surprising "Lady don’t Tek no", a track designed for the dance-floors with its catchy and famous bass gimmick.

In addition to these, the record contained some freestyle exercises, for example from Lateef, maybe the best MC in Quannum, and also one of the craziest in the whole underground scene; or an a cappella version of an already released track ("Last Chance to Comprehend"). Last but not least, this record delivered some rarities, previously available on cassettes only, like "Rhyme like a Nut!" from The Gift of Gab, produced again by DJ Shadow, and praised in its time by The Source magazine, in its "Unsigned Hype" section. And at the very end, all Quannum MCs completed this release by a more recent but nonetheless great "Blue Flames".

Greatest Bumps had 20 tracks, all important enough to deserve a full review. And by chance, the Solesides crew did exactly this: with the inner notes, they presented with minutiae the history behind each song, and the defunct label in general. It provided great details, allowing the very large audience of DJ Shadow to understand where this guy was really coming from, helping them to discover the Bay Area indie hip-hop scene and, in the best case scenario, to get familiar with names like Freestyle Fellowship, the Good Life Café, Peanut Butter Wolf, Bobbito Garcia, Cut Chemist, and David Paul, all mentioned into the notes.

Of course, the greatest assets of this compilation came from its historical perspective. Its quality was exceptional, most songs had aged well, but it was not that cohesive. The freestyle tracks, for example, were always refreshing, and full of verbal ease and virtuosity, but they didn't really fit with the rest of the record. Until 2000, let's say it again, the Solesides crew albums were either definitive classics or heterogeneous compilations, but all were absolute must-have. And Greatest Bumps, which belonged to the latter, was no exception.